There’s been a multitude of Star Wars books released over the years that show much of the behind the scenes work that went into making both trilogies. But there has never been anything quite like Star Wars Art: Ralph McQuarrie: a two volume dedicated entirely to the artist most readily identified with the look of George Lucas’ film saga.

I don’t have much of a collection of Star Wars stuff but one of my prized possessions is a framed McQuarrie artwork from The Empire Strikes Back. I don’t know if I can be too specific on why I like it but his work does a great job of making both the technical and fantastical look amazing together. For me, having a book full of this is just awesome. 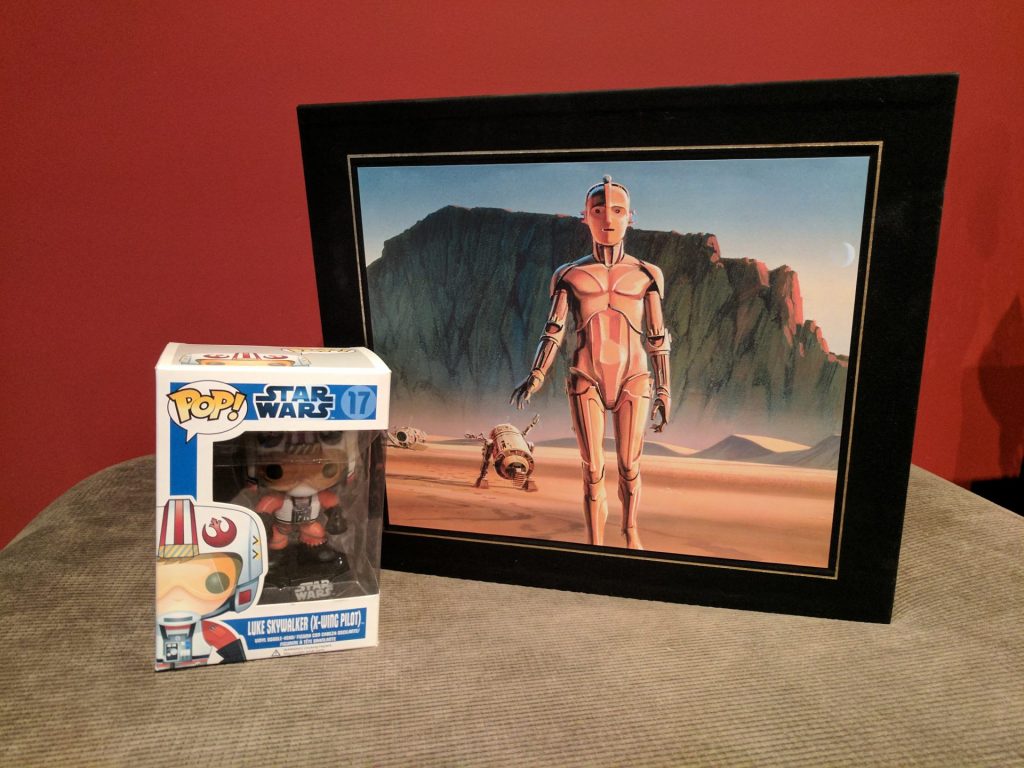 The slipcase for the book is impressive sitting next to my Luke Skywalker figure.

When you first see the total package you can’t help but be impressed with the size and heft of the books which weigh in at over ten kilograms. The slipcase case is quite solid but it has to be with the size of the books it is holding. It’s adorned with one of McQuarrie’s most iconic pieces of an early C-3PO and R2D2 design concept and their escape pod landing.

Within the slipcase, the two volumes are very simple in their look with text only on the spine and a unique illustration on each cover but the quality is extraordinary with heavy binding and paper within the hardcovers. They’re the kinds of books you have to read with it sitting on your lap or on a table.

Both focus on the original film trilogy but aren’t afraid to show some of his other work too. Images related to a film project he was working on prior to Star Wars show clearly he already had “the look” for film that would soon pay dividends. Seeing it all together (we’re talking hundreds of images here) really shows why George Lucas would rely on his vision in the early stages of making the first film.

The individual volumes continue the theme with some great looking early sketches.

These are not just picture books either; there is a substantial amount of text in there too. Some of it is biographical and helps to fill out the story of how McQuarrie started and how he came to be a part of the Star Wars family.

There’s also many notes in relation to the art too with mention of repainted works, lost originals and lucky archive finds. Finding all of this must have been a challenge and it seems that the writers were happy to share their excitement with us too.

And just so you don’t forget why you have the book in your hands, you’ll also see a number of impressive double page spreads that are almost poster size. The dimensions of the book appear to have been done specifically to fit the “cinema” size ratio of most of McQuarrie’s works so they come out extremely well this way.

Seeing earlier versions of well known images is a really cool touch. And there’s plenty of them here too.

One thing that’s got to be said though is that all this glorious work does come at a high price. Depending on where you shop and your region it could be equal to anywhere between three and six full priced games. If you do decide to take the plunge, places such as The Book Depository do offer free postage which can offer a substantial saving considering the weight of it. But still, it does mean this is probably not an impulse buy for many people.

For fans wanting to give a loved one the ultimate Star Wars gift or collectors looking for something unique to sit alongside their other cherished items this is certainly worth considering. It’s an amazing set that pays a well deserved tribute to an artist who helped usher in a new age of cinema from a galaxy far, far away.