Bringing back a Commodore 64 – Part 1

Last year I was lucky to get my hands on an old Commodore 64 which I was hoping to use to build out a new retro gaming system that was outside my usual Atari centric collection. Unfortunately it wasn’t working as expected (okay, it was broken) but I decided to take it on as a side project for which I could use to learn a few things that were outside my comfort zone.

First up has been trying to figure out the cause of my problem. From what I can tell so far the machine is mostly working but there is nothing being output to the TV. Thankfully there are plenty of resources online (including videos) to help out in diagnosing the problem and I’ve been using those as a basis for what I need to do. These have been invaluable in forming a plan of attack and coming to terms with what I might need to do. Being a complete novice on this means any advice is better than what I know now! 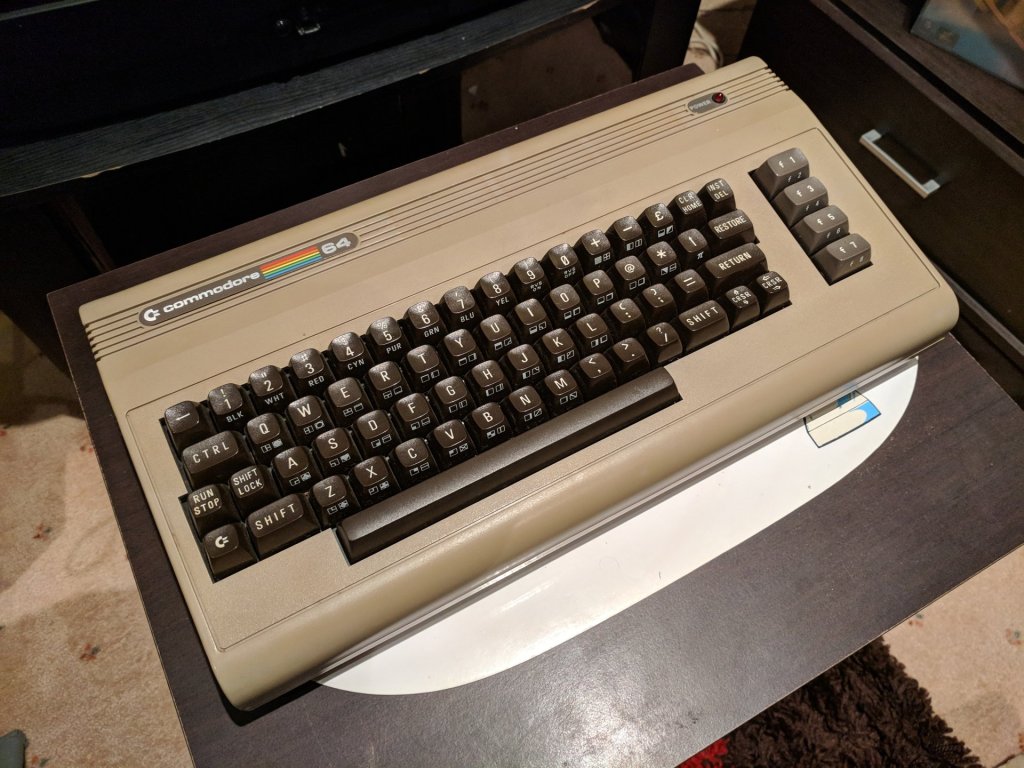 The C64 itself – it might not be working yet but what’s here is still in good condition.

In terms of the usual causes for the issue it sounds like the cause is usually traced to the PLA chip inside the C64, followed by the VIC II (graphics) and then the SID (sound). But it’s also worth checking to see if the power supply is doing its job and also the fuse on the motherboard. Having a multi-meter is handy here which became one of my first purchases with a chip puller.

My next step was to check the motherboard to see if I can find any obvious issues. On first opening the case there were two things I noted: one that the there was a lot of cost cutting going on in there and two that the motherboard itself seems pretty well organised for the most part. I did like that the motherboard uses a lot of socketed chips – handy as most of the supposedly troublesome ones are like this. Just in case some of them had loosened during transport I tried gently pushing some back in and while it was open I also turned on the machine to see if any of them were running hotter than normal which might indicate an easily identifiable fault.

No luck there so I tested out a quick suggestion of removing the SID chip as apparently the machine can work without it so if it is the cause you’ll know quickly enough. Having a chip puller handy makes that test an easy one. Still no result though. Next up for me is going to be testing circuits with the multimeter and seeing what I get. There’s a couple of YouTube videos I can follow here which if I am careful might help steer me in the right direction.

The guts of the C64 – the square area n the centre was enclosed by a perforated lid that was part of the VIC II chip’s heat sink.

Common advice given when trying to fix up a C64 is to have extra parts to swap in or at least a working machine from which you can test components with but since I have neither I’m considering chasing up another machine to cannibalise parts as well as chase up loose replacements. A lot can be found on eBay which is great. Some enterprising people have even developed replacements to the PLA which if that is the problem here would be a much better deal than taking a risk with an old chip. I might even have to look at another power supply too as it sounds like the C64’s ones are generally considered to be shoddy in all their incarnations and more creative people have built their own alternatives that fare much better.

For a computer that is remarkable in its capabilities and impact in gaming, they weren’t really built to last. At least four of the chips can run at a relatively high temperature (the CPU, PLA, SID and VIC II) and the VIC II is enclosed in what seems to me to be the cheapest looking heat sink ever designed so it doesn’t surprise me that these things need a lot of tender loving care to keep running for the long term. I’m definitely looking at an alternative to that heat sink.

Next time I’ll hopefully have some additional parts to work with and/or more information on what the problem might be. I’m also hoping that I won’t do anything too stupid and make matters worse… we’ll see how I go. 🙂