Confessions of a Serial Beta Tester 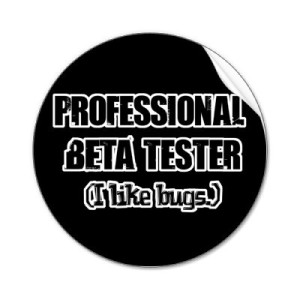 I beta test because of the games potential. If I can see playability, I will test it. If I enjoy it, I will continue to test it until it goes live and then I will continue to push the final code boundaries to break it. I enjoy the challenge, not of the game itself (in beta) but of the fact that no matter how code perfect something can be, there will always be a way to circumnavigate that invisible wall, those hard to kill NPC’s, that one mount that never drops for anyone else, those floating cats that streak across the sky instead of birds and that one quest that reduces everyone to tears, because you didn’t read the unintentionally badly written and misspelt instructions in the first place. I test because I know what I want out of a game.

I want the ability to say to my friends this game is great! The developers are on a real winner when they developed this. I want the ability to say I didn’t waste my time on a games’ potential by beta testing it. I want to be able to put my hard earned money and trust into the AAA and Indie Gaming industry to produce good, playable, sometimes impactful games. I want to have fun and not grind my way through bugs, glitches and hiccups because of developer arrogance thrown into that mix a bit of greed, unreasonable deadlines and unquenchable consumerism. That is what I gain from beta testing.

Unfortunately most games still “Go Live” with bugs that should have been removed at beta. Stress testing servers while still logging game stopping bugs is not uncommon. This is what stops me from subscribing, purchasing or even playing most games I beta test and I test a lot. Sometimes it might only be for a few hours before the reality of me continuing to play this game drops dramatically as the bugs logged begins to rise at an exponential rate. Sometimes the games potential creates a conundrum of do I continue to play and ruin the final game for myself or do I wait for the final to be released?

At present I am beta testing and this is the conundrum I am currently faced with. Its stunning visuals, interesting storyline, new and unexplored territory are sucking me deeper into the path of no return. Do I ruin the final for myself to endlessly quest, explore and ultimately challenge the game to produce those bugs that would stop me from playing the final or do I stop testing to enjoy the final, warts and all, without the knowledge that I could have had a hand in possibly (and not arrogantly) found that game stopping bug. It is a risk reward mentality, like putting your last dollar in a gaming machine or rolling the dice that one more time. A toss up because of game potential being right but this is the life of a serial beta tester.