After almost two years of Xbox One, fans of the platform are finally getting the game that many have been waiting for with Halo 5: Guardians. With the dramas of Halo: The Master Chief Collection taking months to resolve, this game had to bolt out of the gates with a quality product from the outset; anything less would be a deathblow to the franchise that made Xbox.

Getting the question of “does it work?” out of the way early, I’m happy to say that everything indeed works and new modes and issues are already being addressed. So it appears the team at 343 Industries are on top of everything and already working on making the multiplayer modes even better. It’s a very welcome change after those early frustrations wit Halo MCC.

Please note: some spoilers may follow. I will try to avoid going into too much detail and may drop a hint or two but it’ll only be in relation to my own thoughts about the game as a whole. 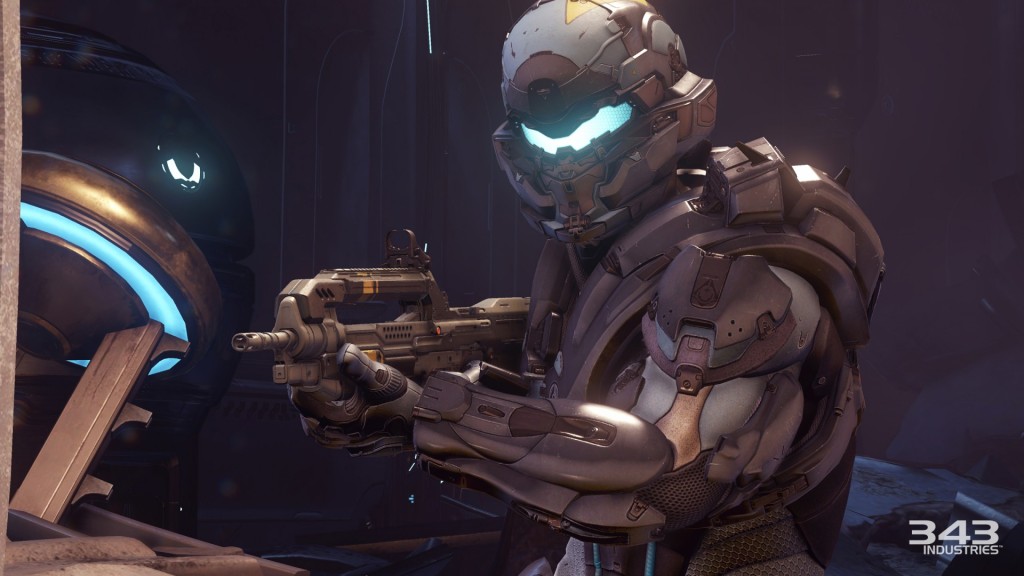 Spartan Locke, who you’ll be spending plenty of time with throughout the campaign.

The campaign starts you off in the boots of Locke (first seen in Halo: Nightfall but now upgraded to a Spartan soldier) as he and his Spartan IV allies in Fireteam Osiris smash through Covenant and Forerunners in a spectacular opening cinematic. The other three members of the team operate as either AI allies or your friends will take their roles in four-player co-op. A really nice touch is that in co-op everyone gets to choose/swap characters per mission as each has a different starting weapon loadout.

Regardless of your choice, you’ll get to hear a lot from them, especially Buck (a returning role for Nathan Fillion). It’s all there to quickly build up these characters and for the most part it works well though Mike Colter suffers a little this time being put in the player’s shoes as Locke.

Once the opening mission is over you return to more familiar boots in the form of the Master Chief and his old Spartan II team mates who were first introduced in the Halo novels but are making their debut appearances in a game. It’s a shame though they are thrust into the game this way as less time is spent with this team and a lot less work done to build out their characters.

I suppose in the context of the novels these Spartans are always “shoot first, talk later” but unless you are familiar with the extended universe they are going to appear more like blank slates to players. After hitting the right notes on Halo 4‘s campaign, it seems odd for the next game to distance itself so much from the Master Chief.

Advertising hasn’t helped. It had billed the game as Locke versus the Master Chief but it turns out to be anything but that and it feels like some of the hard work done to build up Fireteam Osiris is undone in the closing moments of the campaign as you are left wondering “Why didn’t I get a chance to play the Chief more?”.

One area that you won’t hear any complaints from me though is the production values. Like Halo 4, the latest game really pushes the art design to a degree that Bungie never seemed able to build on towards the end of their time with the franchise. There’s some crazy looking skyboxes, sprawling vistas and worlds bursting with more life than ever. You still encounter a lot of monochromatic Forerunner installations but between those is a lot of colour. And 343’s much discussed dynamic resolution system keeps the game running silky smooth at 60fps which works well enough that you’ll be hard pressed to notice any impact on visual quality when in the middle of a battle. 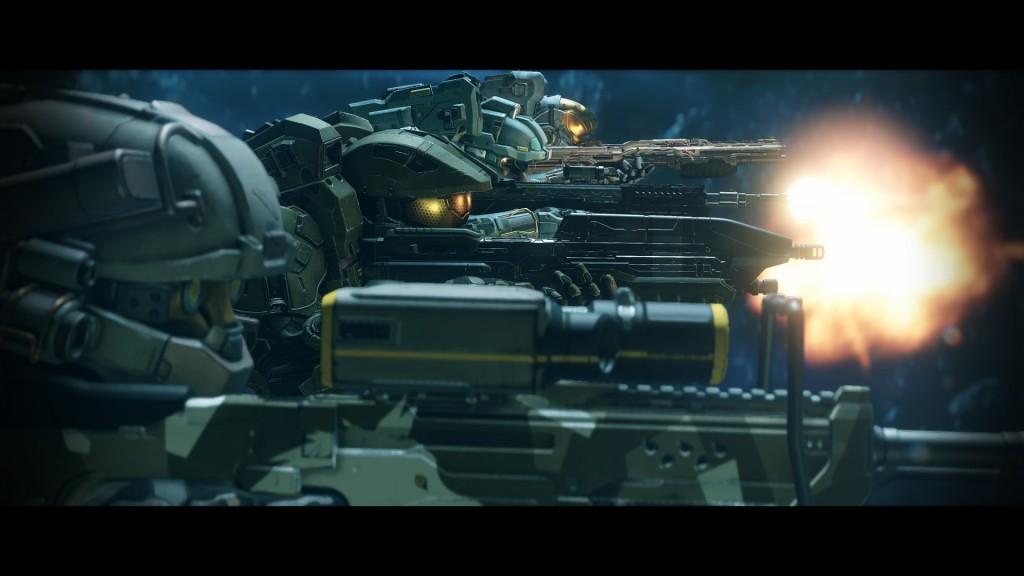 No matter how cool the new guys are, you might still be wanting more of the Master Chief’s Blue Team.

Audio deserves a mention with Kazuma Jinnouchi taking the reins after Neil Davidge’s work in Halo 4. Unlike that game’s soundtrack which forged more of it’s own path, what we have this time is a soundtrack that takes more cues from the work Marty O’Donnell and Michael Salvatori had done in earlier games. Coupled with great sound effects, the game maintains a high standard that works exceptionally well. It sounds awesome if you have your console hooked up to a surround system but you may consider adjusting the music volume from the defaults because it can occasionally drown out the effects.

Gameplay maintains Halo‘s signature combo of guns, grenades and melee and will feel familiar to long time players in the beginning. However that will change soon enough once you become familiar with the new clamber and boost skills which allow your Spartan to vault over taller obstacles and dodge attacks with a blast from your backpack. The clamber is the one you will use the most – it makes movement through levels a much smoother experience and while it is certain the maps were designed specifically for that it doesn’t come across that way as you bound around. The final touches to your new skills is a ground pound attack and a hover mode when aiming down a weapon that’s useful for getting that little bit of extra height for distance shots.

Multiplayer is a whole different world compared to Halo: MCC and it’s down to 343’s willingness to push forward in two different directions. The first is bringing in competitive modes that are more aligned with eSports and the other to bring in a massive sandbox where players get a chance to throw arsenals at each other and AI combatants.

A good example of the new competitive game types is Breakout which from my own impressions is almost paintball-like. Two teams of four jump (literally) into a tight map and attempt to win by eliminating their opponents. There are no respawns and the first team to win five rounds is the overall winner. The result is a fast paced game that produces a clear result at the end and probably works well from a spectator perspective too.

I have to admit I like the presentation aspects of this mode as each team leaps into the map at the start of each round. It really does play into the sporting aspects of the game type. It also ensures that both teams are starting off in the same locations so there isn’t any chances of getting a fortunate spawn point on round start.

At the other end of the spectrum is Warzone which is 343’s “everything including the kitchen sink” game type. Imagine taking a map of scale like Battlefield (up to 24 players), a card system like Titanfall but useable throughout the game and mid-mission objectives a shade like Destiny and that just about sums it up. 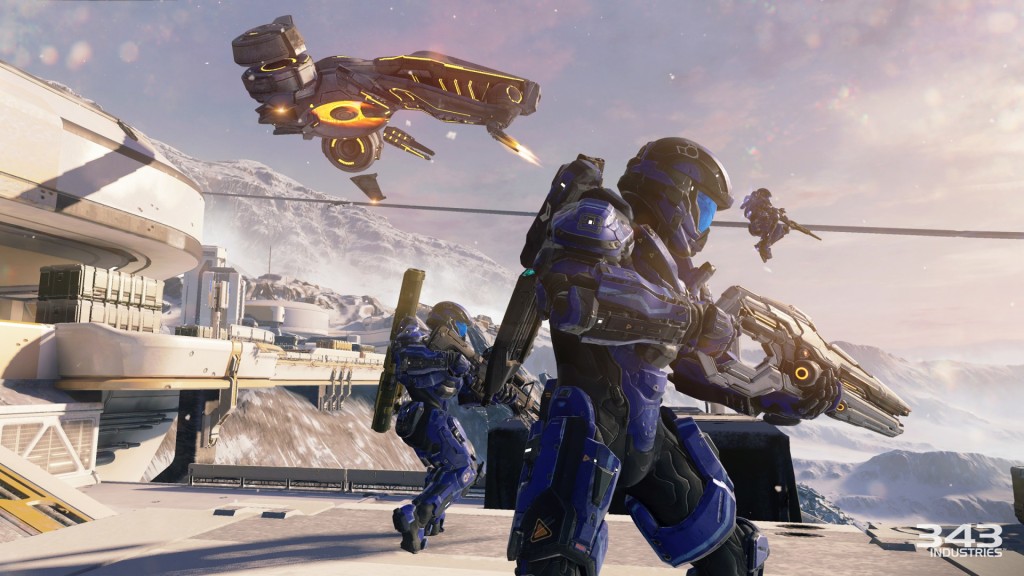 How does it play? It’s chaos but in a refreshing way. A lot can happen at once; not only are there two teams of twelve facing off in a “capture and hold” type match racing to be the first to 1000 points but are dealing with AI combatants including the occasional “Legendary” characters (some on foot, some in vehicles) who reward teams with 75-150 boosts to their scores. The variety of ways to score can mean a game can swing quickly from victory to defeat if your team isn’t nimble enough to face multiple threats. Being a player whose kill/death ratio is on the wrong side of good (ie. it’s not) these swinging results aren’t much of a concern but it can be great fun to be part of a group that goes all in on an objective to snatch it away from your opponents.

To further add to the mix is the REQ (requisition) system – during the course of play you ear points that can be used to purchase in game card packs. These cards offer both permanent (armour designs) and single use (weapons, vehicles) items that can be purchased at REQ stations throughout the maps. To prevent early game spamming with power weapons, cards have points values that require the player to work their way up to within the game.

Though there may seem like little incentive to use rare cards at the end of a game for fear of wasting, such as on a Scorpion tank, you tend to accrue points at a pace that purchasing new packs may reward you with a replacement soon enough. The contents of packs are random (with the exception of permanent unlocks) and can be purchased through earning REQ points or spending a couple of dollars if you want them immediately. Plus you can “sell” those unwanted cards for REQ as well, helping you get closer to more packs.

A notable absentee from the multiplayer list is Big Team Battle but 343 have informed everyone that it will be making its return soon. Also coming will be the first batch of new maps that are coming free to all players. Some of them will be new and others will be creations from from Forge, the Halo map making tool. The Big Team Battle update will include four Forge maps designed with by the community that take cues from earlier series maps.

Moving the paid DLC dynamic away from the maps and into REQ packs is a courageous move that may pay off in the long term with better retention of players as no one is ever going to be gated off from multiplayer content or playlists. At a time when Xbox is now longer the place to be to get first access to new maps for other shooters, this provides a lot of incentive to stick with the home team’s game. I actually hope it succeeds and makes other publishers reconsider their DLC plans… the age of the season pass really should come to an end. 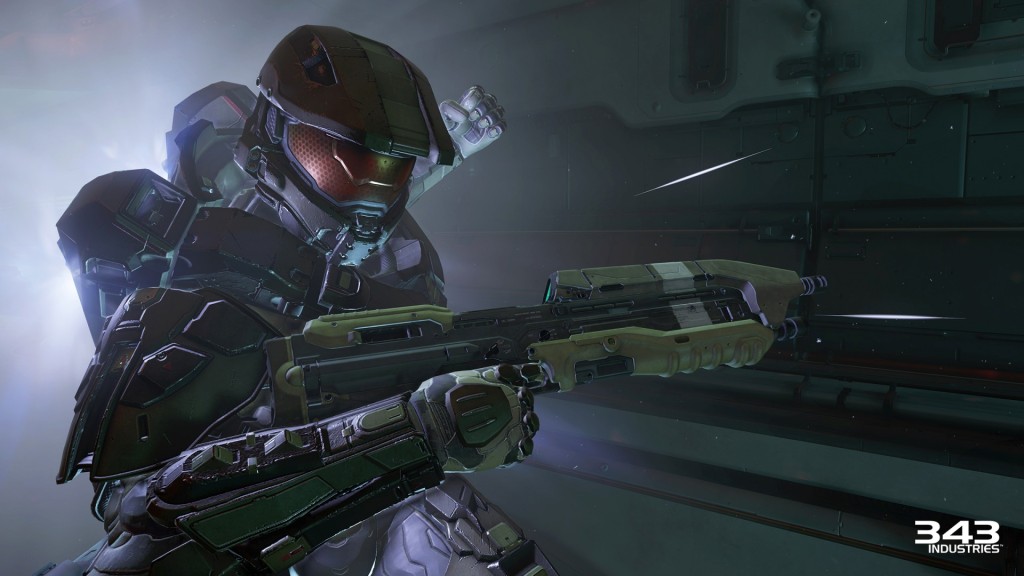 More of this guy next time, please.

If you felt burned by Halo MCC, it’s time to patch those wounds and pick up the controller again. To paraphrase a certain police commissioner of the Gotham variety, it’s not the Halo we may have wanted but it’s certainly the one we needed. The wait has been worth it as we finally get to see what a next-gen Halo really looks like on Xbox One. And it looks pretty damned good.

Categories: Gaming, Halo from the outside, Reviews & Impressions