After much anticipation and hype this year at E3, Forza Horizon 3 Ultimate Edition was finally released on the 23rd September (standard edition is out the 27th). I’ve been a keen Forza fan from the start with the very first Forza Motorsport on the original Xbox console. I have bought every Forza game since. I’m also very glad Playground Games and Turn 10 worked together to create the Horizon spin off series as car games are very well suited to the open world.

Plenty of Aussie classics in this game.

With Forza Horizon 3 all of us get to race and drive around in the Australian backyard and it is fantastic. The sound and graphics are just superb and have been vastly improved over Forza Horizon 2. There is a lot of Australian culture in this game and you can really see how the developers have tried to capture the Aussie essence, from the Australia Post mail boxes to the Telstra phone boxes. The landmass is approximately double the size of Forza Horizon 2 and it does show. The ability to drive almost anywhere within that land mass is a great technical achievement. It isn’t the size of The Crew but when you see amazing quality that Forza Horizon 3 manages you forgive that small gripe very quickly.

The main emphasis this time is that your character is in charge of the Horizon festival so you get to decide what festivals to upgrade and unlock. You start out in Byron Bay and then as your fan base grows, the need for more festival sites becomes apparent. You have some choice as to what your character looks like this time, plus you can select a name or nickname for audio cues. It is these little touches that add a lot to the already impressive Horizon series. You also get to recruit other drivatars (up to four) and this helps earn you more of the three levellers in the game: credits, XP and fans. Having more fans unlocks more content along the way, like more Showcase events (which make a return) and the ability to upgrade and build multiple festival locations.

Not only can you determine which festival site is to be built and upgraded (this adds more events and stunts), you can also have a say in what events and championships are to be raced and how. So far in my 30 hours  of playtime I haven’t been able to set my own custom route but you can change the car types and theme of each race, plus change all the weather settings required. It even allows you to specific current time of day, which is a nice touch as it allows some continuity between the racing and the free roaming. For circuit races you can also change the number of laps too. This mode is called Blueprint mode and it works well – plus any of your friends can see your newly created event or championship (series) and play that instead of the Horizon 3 default. You can easily race blueprints that your friends have designed and they show up automatically when you jump an event.

These images are heavily inspired by Mad Max. 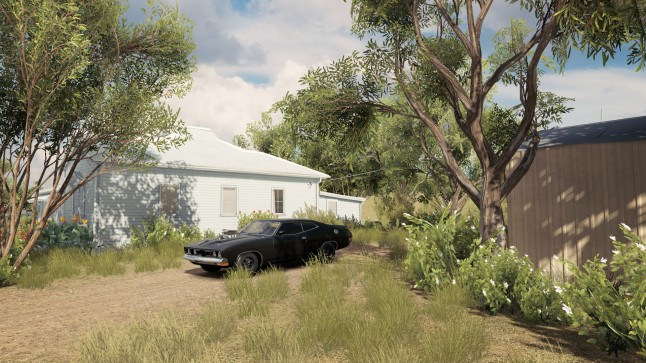 Graphics are really something – even the trees are authentically represented

Illegal street races are made more obvious this time round and your event organiser reminds you that these are not sanctioned races. You won’t win fans here but it is a good source of income and XP and allows you to race in the traffic. It would have been nice to see some cops chasing you during these events but that is something I’m sure can be built upon. For most part you are racing as part of a sanctioned festival, which provides a reasonable explanation of why there aren’t any police around.

Multiplayer has been refined completely for this game. You now have the option of playing the single player campaign in four player co-op. This works really well and basically you can progress through the main campaign while playing with friends. PC and Xbox One cross play has also been setup for Forza Horizon 3 and it works flawlessly as well. Night Owl and I tested this and we were both really impressed with the results. Other modes are Online Free Roam and Online Adventure. Online Adventure is basically Forza Horizon 2‘s Online Road Trip and plays pretty much the same.  They have still tweaked the multiplayer though. Now with the Infection, King and Capture the Flag modes it has different map sizes available on each of the areas. 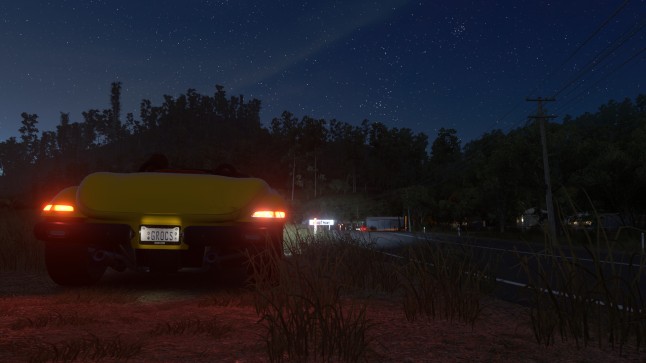 Lighting is just incredible this time around – particularly at night.

The rain can get quite heavy. This is after a heavy shower.

Customisation is still amazingly varied. You still can paint your car, create liveries and designs and share them. As with previous games you can still upgrade your car with a number of performance improving parts or download and install a tune from another player. New additions to this game though are specific body kits that are available to a number of cars (not all). Some of these change your everyday V8 into an absolute beast pumping out 1000 bhp. These are also customised in terms of textures and objects and are in addition to what is already available via the upgrade menu. You also have Horizon Edition cars available too – which add more bonuses depending on what the car has been designed for (drifting, speeding, skills etc). 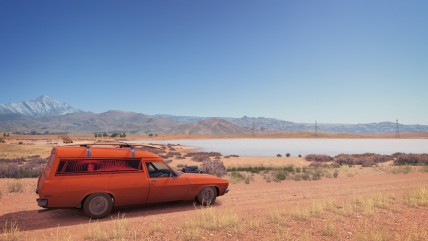 Notice the body kit for this car. 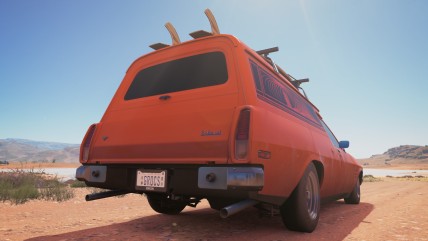 Customising your number plate is easy and can be done at any time.

You can import your liveries from the previous current gen games too which is a nice touch and will save a lot of painters a lot of work having to recreate their designs. Other features to make a return are the Barn Finds and Photo Opportunities. You have three skill trees now and you have unlock some of these features, like Photo Shoots by spending some of your skill points in unlocking them. Just like the previous Horizon game you earn skill points by pulling off amazing stunts, drifts, drafts, speed and near misses.

What makes a great return is the Auction House. Finally you can hunt for a bargain again. I actually really like this part of the game and the Auction House hasn’t been around since the Xbox 360 days. So far I have picked up quite a few cars for just over half the price found in the normal in-game store. My best buy so far was a Ferrari California for 33k (normally 125k). It is really good to have the Auction House back and it allows you to pan around the car now to see the paint job and upgrades in all their glory.

Forzavista makes a return minus the voice over, which doesn’t worry me one bit. Other nice touches are things like the car starting and showing off the awesome sounds of your new ride before exiting when you hit “drive”. You have over 350 cars to buy from the start so there is plenty of cars you’ll love. I’d love to see motorbikes in the game so I am hoping it may come out as DLC. It would be just perfect adding some dirt bikes and cruisers, but we’ll just have to wait and see if that eventuates (please Playground Games). 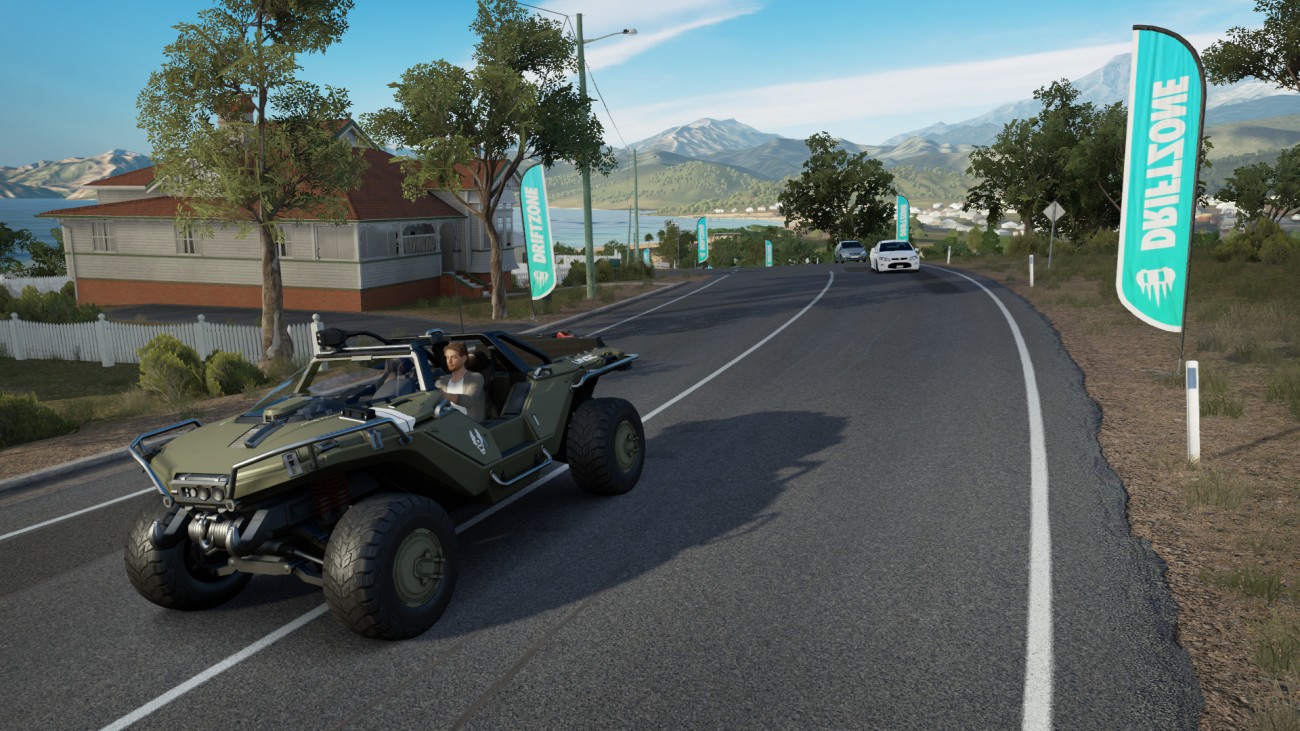 If you’ve played Halo you would have received a code to drive a free Warthog.

There really isn’t anything not to like about this latest Horizon game. It really showcases the Xbox One and it is great that PC users can bump the detail up to 60fps and 4K if they have a machine powerful enough. It is a stroke of genius being set in Australia and I do think this game might just sell a few more Xbox Ones.  If you have any appreciation for cars, driving and racing you shouldn’t miss out on what I will say will be the best driving / racing game this year.

I’ve created a custom Impreza vs Evo event and choose the 2015 Subaru.