A great little fighting game came out on Early Access on Xbox One and PC a couple of days ago. Developed by Mind’s Eyes Games, Blast Brawl 2: Bloody Boogaloo is a fun co-op, versus, and single player beat em up. The premise involves heroes been taken from their home planet to battle it out in a different world to see who is the ultimate brawler. A good character to start with, The Warrior in action with her long sword.

Once you’ve completed a basic optional tutorial you can choose between the two main characters shown in the brief intro; The Warrior and The Brawler. Out of the two opening characters I had much more success with The Warrior because of her long sword and lightning attacks. The Brawler is probably suited to someone above my skill level because you have to get a lot more up close and personal with your enemies to dispatch them. From there it is up to you to build up your gold coin reserves to start unlocking the five other characters (seven in total) that you can play with:

There are tutorials for each of the characters too, which is a great idea as they all have some unique abilities. 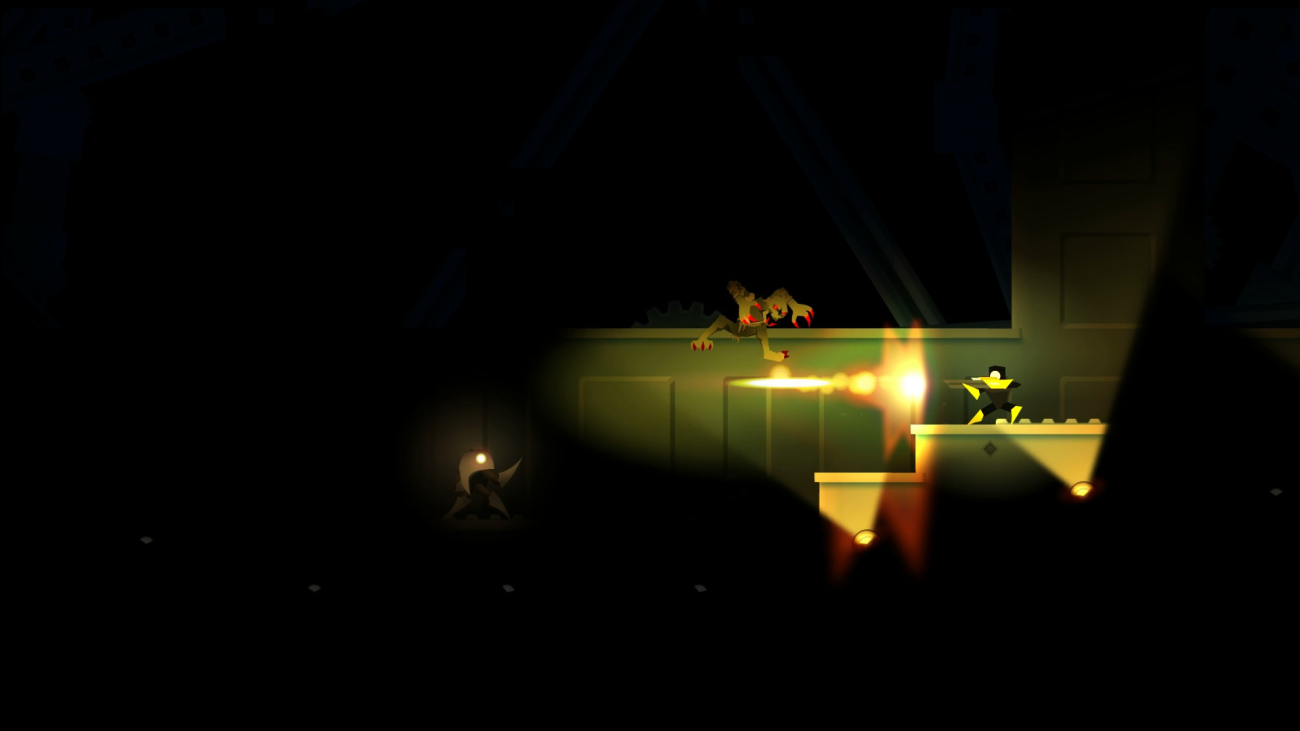 The night levels makes for some very close encounters.

I really like the art style of this game. It reminds me of a classic road trip game Interstate 76 with it’s unique polygon art style. You also have the choice of turning a retro look on as well to show you eighties style CRT like display, including scratches. This is a really nice touch and certainly makes you feel nostalgic.

The game focuses on one hit kills so it is all about parrying, jumping over and avoiding attacks while providing the deadly strike of your own. The gameplay at times reminds me of the classic arcade game Joust. The Pirate character certainly helps recreate this feel as you can fly around the map on your parrot, but even with The Warrior you can do some crazy high jumps that cover a good portion of the playing area.

Even though there is copious amounts of blood, because of the art style it doesn’t seem over the top.  The physics are really good with the body parts too.

I mainly played Wave mode, which basically pits you at increasingly difficult enemies with your limited lives. Certain levels also have environmental hazards, which can work to advantage when you having trouble dispatching a foe the traditional way. Unfortunately you can also fall foul of these hazards too. I didn’t get to try the multiplayer, which you can elect to do online or via couch (local) multiplayer. The game supports split screen too. You can co-op to fight the increasingly difficult waves of opponents or play the Vs mode.

Being Early Access there are some little quirks to iron out still. The button prompts still show up as the PC keyboard equivalents even when you use an Xbox One Controller like I did. This did make it a little tricky to work out what buttons were mapped to which attack, parry and jump. The audio for me also seemed to be by default way too loud too but if you set the audio bars in the middle instead of near the top that sorts that small gripe.

Multiplayer options are abound with this game.

This is a fun little game that deserves your attention and is very playable now, even in early access.  Another positive point to note is the variety of music (apparently there is 20 hours of it) and you can change the radio station to play the retro style arcade music you prefer. Blast Brawl 2: Bloody Boogaloo hails back to the classic arcade games where one hit means death and it is a fun diversion from the modern generation of games.

Blast Brawl 2: Bloody Boogaloo is available on PC (Steam Early Access) and Xbox One Early Access for $14.99 US. Steam currently has the game on sale with 15% off (until 2nd November, 2016).

Reviewed on PC via a review copy on Steam.