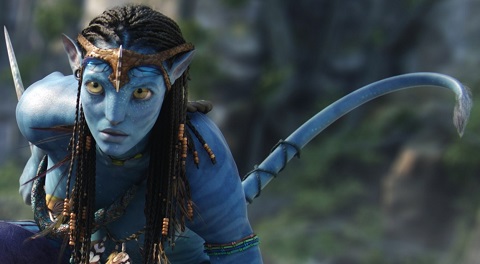 I know it’s been out for some time now, but I finally plucked up the courage to watch the 3D version of James Cameron’s Avatar, that little known movie about blue aliens that rips off Dances with Wolves.

You might be asking why I would need convincing to watch it but when I had the chance to see the film at the cinemas with my wife we both walked away feeling ill. For us, it seemed a little too much to take in and left us with mighty headaches.

As a result I approached the movie with just a little trepidation.

Visually the BD version is a lot brighter than its cinema cousin which does much to improve the already amazing visuals. Such colorful vistas beg for a bright screen and this is a proof of it.

It does good with the 3D too; the brightness doesn’t force you to concentrate as much thus reducing chances of headaches.

But some scenes can still be overwhelming and it is certainly advisable to try and focus on the key elements (such as characters) and avoid those in the periphery. Worked for me at least.

Avatar continues to rank at the top of the heap as the most accomplished 3D movie yet made but it is also indicative of the limitations of the technology at the time of its release.

Thankfully the home version helps to alleviate some of these problems, making it a much friendlier experience.