Emulation on Surface Pro – Gaming history is fun on the run 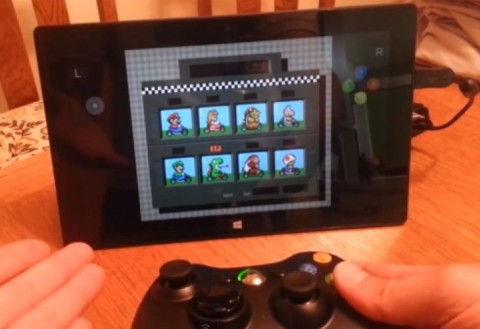 A week and a half ago I went away on holiday with my family and decided to bring along my Surface Pro to keep me occupied during moments of downtime. Seeing as I was also going to be Internet free too I thought I would install a few apps in advance to keep me occupied. Eventually I found myself searching for emulators to feed my retro gaming needs.

There have been many emulators available over the years (M.A.M.E. being the most well known) but my concerns were that most would have issues dealing with running on the Surface hardware. Previous experience had taught me to be wary but with the release of Windows 8.1 it seems that application compatibility has improved significantly.

In addition, there have been numerous developers who have been releasing Windows Store emulators which immediately overcomes any concerns for platform friendliness but also allows for cool features like SkyDrive integration.

The following is a list of emulators that I am currently using on my Surface Pro with a few thoughts on how they work on my mobile “emulation station”.

Hatari
The still in development Atari ST emulator benefits greatly from that fact and works well on the Surface in desktop mode. The UI allows users to get up and playing quickly but seems to have issues with handling some disc images. Nevertheless it plays Dungeon Master perfectly and the rest is gravy.

Altirra
Another Atari emulator but in this case for the 8-bit systems. The app has a lot of options required to be set initially but once done it becomes a cinch to run. Its more technical features like the integrated debugger have the potential to even turn it into a teaching tool. Perhaps the most comprehensive emulator of the ones mentioned here.

Lynxstalgia
The first Windows Store emulator of the list (of yet another Atari system), this is one of many produced by the same developer and it shows. For a recent release it is surprisingly capable and apart from issues with sampled sound, gives a very accurate experience.

SNES8x+
A Windows Store version of the popular SNES9X emulator. Being built on such a long maintained and high quality codebase helps this one be capable of handling almost anything thrown at it which makes it a perfect choice for classic Nintendo fans.

ScummVM
Originally a LucasArts games emulator only, ScummVM has expanded to include a raft of other titles that makes it the adventure game version of M.A.M.E. but without the DOS interface. Curse of Monkey Island still looks phenomenal and works perfectly through this.

CCS64
Another long in development emulator works well in desktop mode and thanks to the platform having one of the biggest and best library of titles from that era it is a great app to get into retro gaming on the run.

M.A.M.E.
After initial troubles with it running under Windows 8 due to driver issues, it now works fairly consistently and runs a treat on the Surface. The varied display modes for the games work nicely and classic titles really come up well but the DOS UI is a bit of a pain as it doesn’t show all the available titles at any given time. Just don’t try rotating the screen while it is running as it wont deal with it nicely.

Closing
All in all, I have to say I’ve been pleasantly surprised with how well the Surface Pro handled the various emulators. Only real thing you need to ensure is that they had been maintained to at least Windows 7 or Vista to ensure some decent hardware compatibility. And with the ease in which an Xbox 360 controller can be used within the apps, it makes for a very nice and portable gaming system that will cater for most of your retro gaming needs.