It’s hard to believe but it’s been almost twelve years since Homeworld 2 graced store shelves. Since that time the developers and IP was passed on from Sierra to THQ. After the latter’s implosion and sell-off of IP and assets, the series became a surprise acquisition by an equally surprising developer.

So now, thanks to Gearbox Software and friends we once again get to revisit Relic Entertainment’s original real time strategy hits Homeworld and Homeworld 2 via the Steam marketplace. 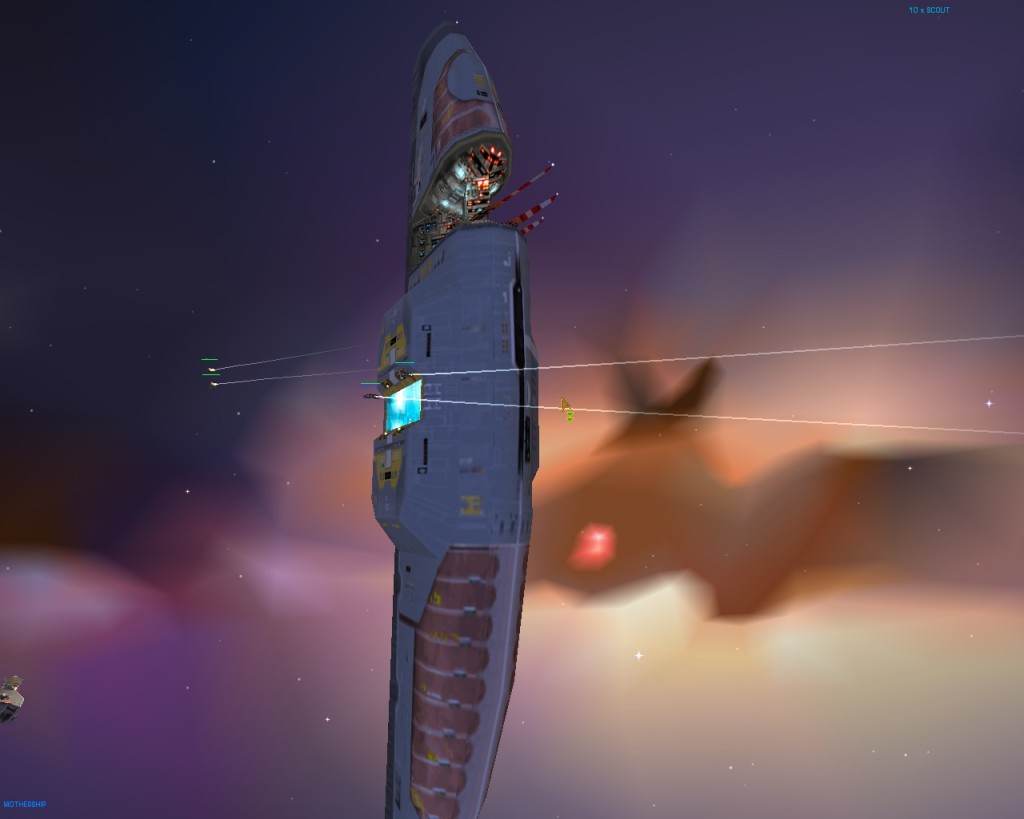 The original version of Homeworld still looks great thanks to OpenGL support.

Not only has Gearbox, with help from some of the original game’s developers now working at Blackbird Interactive, made the games compatible with modern systems but have also provided remastered versions that push the visual and audio fidelity to new levels.

The Steam installation takes up about eight gigabytes of storage in total which is fairly modest considering it includes both the remastered games and their original release versions PLUS the beta multiplayer client. All of these are accessible through a unified menu.

One unfortunate omission from the collection though is Homeworld: Cataclysm which was the only game in the franchise to not be developed by Relic. Current belief is most of the source code and assets used by the developers Barking Dog Studios have been lost. There is still some interest in finding a way to make it happen in the future but I’d imagine those chances would only improve if this release is a success.

The storyline of the series revolves around the Kushan; a race of people living on the planet Kharak who discover an ancient spaceship with a map pointing to their true home, Hiigara. The first game covers the trials they face in returning to their home. The sequel continues their story as the consequences of their return bring even greater threats.

Of the two titles, the story of the first has that greater sense of wonder thanks to introducing the world to fresh eyes. The urgency of protecting your fleet brings back memories of Battlestar Galactica and the game capitalises on that mood immensely. 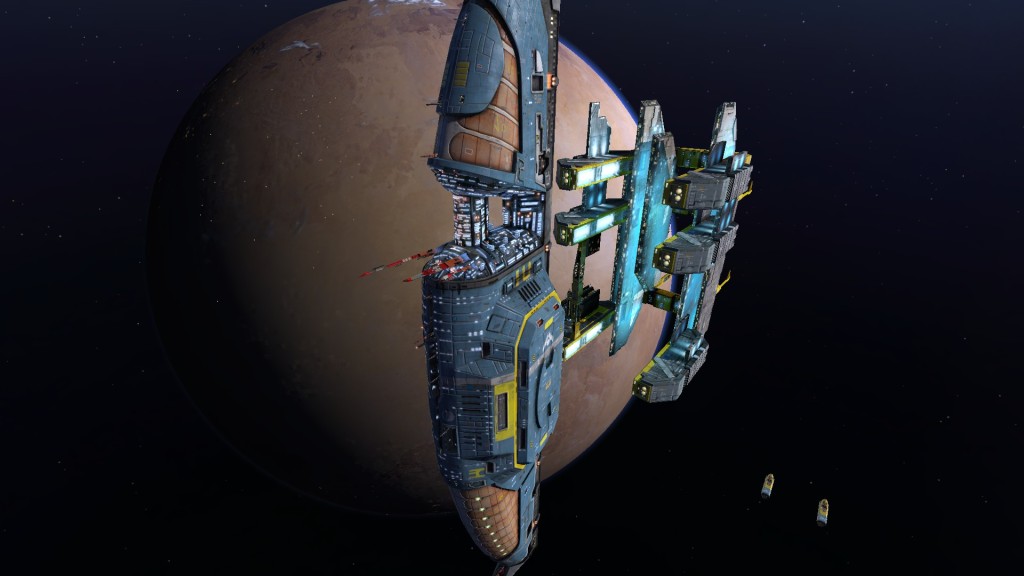 The remastered games wow you with a stunning visual design that is still unmistakeably Homeworld.

The game itself is very similar to other real time strategy titles of the era in that you search the map for resources to build up your own “army” (or in this case, fleet) which you then use to defeat the enemies and complete the mission. However, there are a couple of notable differences in how this plays out in the Homeworld games.

The first is the movement of your units. Unlike most RTS titles which effectively place you on a 2D map, here you have a three dimensional volume of space from which to manoeuvre and ultimately conquer. It’s not the easiest to explain in writing how it works so forgive me for this slight deviation as I make use of a Star Trek reference.

One of the best movies of the franchise is Star Trek II: The Wrath of Khan which has a tense finale involving two starships facing off, virtually blind. During the encounter Spock (played by the recently departed Leonard Nimoy, RIP) mentions to Kirk that the patterns used by their enemy Khan imply he is using “two dimensional thinking”. Kirk seizes on the opportunity and uses elevation to evade Khan and move his ship into a winning position. Keep that in mind and then imagine you are doing that for a fleet of ships which often need to capitalise on enemy ships having weak points all around their hulls… that’s Homeworld.

Now in execution that may not be so easy to accomplish initially in the game as the interface requires a two step approach when setting waypoints; first for the X/Y coordinates then the Z axis. After some practice it gets better but thankfully the game doesn’t go too overboard on 3D positioning and tends to place most targets close to a common 2D plane. It is the one area of the game that could cause the most difficulty with players and the developers seemed keenly aware of it and did their best to lessen the impact.

You can almost be transfixed by the ballet of light when battles begin to get intense.

Another area of difference from games of the genre are its use of a persistent fleet through your campaign. The ships and resources accumulated in one mission are carried across to the next. Potentially it can be a rewarding for players who are smart enough to preserve their ships or anticipate their future needs correctly but this door can swing both ways. One of the missions in the first game’s campaign (Diamond Shoals) will quickly punish those who don’t bulk up their fleet appropriately and may just force players to repeat the previous mission just to ensure they have the right tools from the start.

The difficulty of the missions themselves can vary (such as the before mentioned Diamond Shoals) but most of it can be approached rock-paper-scissors style; all ships in the game have their counters and it’s often a case of using those counters at the right time. There are still other ways though that you can engineer the outcomes in your favour. A useful tip early is to make extensive use of salvage corvettes to hijack ships and help bolster your fleet. There are a few opportunities early in the game to do this when the enemy is sending smaller numbers of ships in your direction.

Visually, the games evoke the mood of 70’s style sci-fi; ships are not all sleek looking vessels and clearly imply their function thanks to detail that even goes down to individual gun turrets on the larger vessels. The design of the mothership in particular is almost iconic; players will never forget it once they start playing. But it is the use of colour that really sets it apart; in the universe of Homeworld, space is very rarely black and it does wonders to setting the right atmosphere during missions.

When the original games were released, they continued the trend of showcasing the advantages of 3D accelerator cards. Now that such features are the norm in PCs it’s nice to see that even at the games lower quality settings it can still pack a good punch. What I do appreciate is that the classic versions have not forgone 3D support as I was initially worried we would be getting “bare bones” software rendered versions. Playing these games on my 3dfx Voodoo3 equipped PC left me with plenty of fond memories of how great it looked then and it’s heartening to see that modern machines can still show the games at their best.

Cutscenes are used extensively between missions and use a hand drawn style with minimal animation that is in sharp contrast to the graphical fidelity in the missions themselves. At a time when full motion video was the norm for games of the genre, this was another way the game stood out from its contemporaries.

And it may have been a saving grace too as the cutscenes have benefited lot from the increased level of detail given to them in the remastering process; something which may not have been so easily achieved if a more “traditional” FMV approach had been used instead.

Even the minimalist cutscenes get a boost from the remastering.

The audio deserves special mention. Voice and sound effects are top notch and go a long way to adding a human element to a game where all you see are spaceships. Hearing reports of hull breaches is only going to make you regret you didn’t do a better job of supporting your fleet.

And then there is the music which is absolutely stunning. By Paul Ruskay, it varies from choral moments through to thumping percussive pieces that in hindsight are almost prototypes of Bear McCreary’s exquisite work later on Battlestar Galactica. If you have good headphones or a thumping audio system hooked up to your PC, do the right thing and turn up the volume.

This all adds up to creating a universe that it is almost prescient in how science fiction has been approached in more recent years; with the best recent example being of course BSG, though that opinion is only going to help if you can forgive the producers of that series for the quick ending, making Starbuck a space angel, etc.

So… are these games for you? If you loved the original releases, yes. The fresh coat of paint makes them better than ever. If you’ve never played them before though be prepared for a little bit of a struggle at first as you work through the controls. But persist and you’ll be rewarded with a pair challenging strategy games whose stories are just as thrilling to experience as the missions themselves are to play.

It’s actually scary to think that Relic got some much right with these games all those years ago that no one has been able to better them in that time. But I’m also relieved that there are so many fans out there that the franchise is finally being revived for a new generation of gamers to experience and enjoy.

With Blackbird Interactive now working on the prequel Homeworld: Shipbreakers, this release could not have come at a better time. It shows that the franchise is in safe hands and that the right people are there to make a new game in the series true to the originals.