Forza Motorsport 6 – an amazing 10 year tribute to the series

At 11:01pm on the 10th September I was finally able to play Forza Motorsport 6.  Sixteen hours worth of play later I can safely say this is something truly exceptional. Forza Motorsport 6 is infinitely better than Forza Motorsport 5 and it just shows you what another two years development time can do to a series. The graphics and sound are nothing short of the best I have ever seen on console, including Forza Horizon 2 from last year. The lighting effects, especially at night, are wonderful. Driving in a convertible at night shows all the shadows and light change constantly as you are sweeping past floodlights. Not only does Forza Motorsport 6 have great rain animation but fog and other awesome particle effects as well. 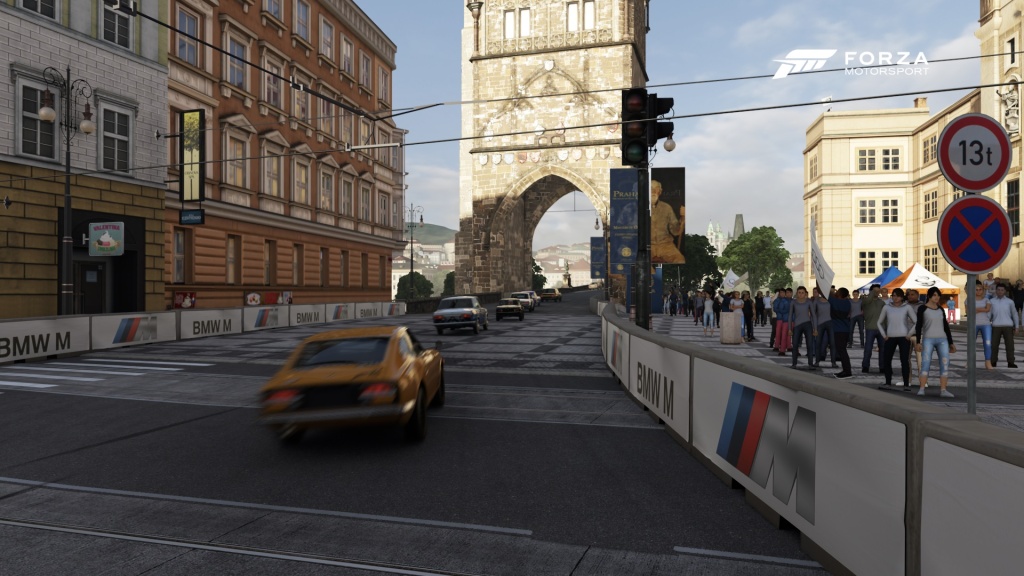 Have no fear, this is still a simulation at heart but there is a lot more accessibility for casual racing fans too.

There are some hard core gamers out there that don’t think Forza Motorsport 6 is simulation enough. If you turn off all the assists and rewind, bump up the newly improved drivatar system in terms of difficulty Forza Motorsport 6 will humble you. My first rain race without assists (except for ABS) I finished 13th, because I lost control slightly a couple of times on a corner. I was racing a 1969 Nissan Fairlady Z and it is hard to keep straight through corners with the springy suspension. The rain isn’t a gimmick – it is bloody fantastic. The drivatars have also been toned down a bit. They can still be aggressive but if you find that too much there is an option to turn their aggressive behaviour down now. You can also pick between a male or female driver now too.  For those who didn’t see replays in the demo, don’t worry – they are in the full game and look great.

Unlike other games the rain and puddles really make a difference to how the car handles. Simply Brilliant.

The racing in this game is tight and frantic, especially with the lower classed cars I’ve decided to start with. I was concerned it wouldn’t live up to the hype. My doubts about this game are completely gone now. Almost everything about it is just amazing. Even the user interface and new menus have been completely re-vamped. The graphics and sound are simply incredible. The music fully complements the game and is subtle and understated.

I like the newly introduced “mod” system. I had one “dare” mod that meant I started 22nd (out of 24) on the grid. This makes it quite a challenge getting into the top three but I get an extra 30% worth of credits. I think the “mod” system works and adds a little bit of spice to a race.  You can buy mod packs with your hard earned cash. These mods are not a gimmick; it actually means you no longer have to change the AI drivatar difficulty to get to the next race in a series. Struggling to get 3rd in a race? Simply add a crew mod that gives you a bit more grip and braking and it may be enough to get you through. Brilliantly executed and I’ve found very useful during the races so far.

Another great improvement is the removal of the “sticky” grass problem that plagued Forza Motorsport 5. The grass doesn’t slow you down now on the tracks. You lose massive traction and it is an extremely difficult to hold the car steady but if you come off onto the grass you don’t get speed penalised. What Turn 10 have done with the tracks is to add barriers to stop racers attempting to use shortcuts. So Road Atlanta for instance has barriers on the track in Forza Motorsport 6 that won’t allow racers to shortcut.

24 cars for every race is just simply great. 24 player multiplayer too.

During your normal career you unlock special “Showcase” events. These can range from racing “The Stig’s Digital Cousin” in Top Gear to doing factory spec races on an even playing field.  Also back from previous Forza games are the endurance races. These are the incredibly long (300 miles plus) type races. I haven’t had the opportunity to try these yet but I am hoping it actually has fuel and tyre wear. I’ll keep you posted on that one. One of the earlier events I tried was a 70’s and 80’s GT race. These early GT beasts are fantastic to drive and I think it is these types of showcases that really show off just how much improved Forza Motorsport 6 is over previous games. The showcase events can be played at any time and won’t interrupt the normal career mode. They are great for taking a break from a race series and trying something different. Another great example of a showcase event is racing in the Forza Motorsport 6 cover car, the 2017 Ford GT, where older Ford GT cars are given a head start.  You’ve then got one lap to try and overtake all of them.

One of my favourite showcase events so far has to be racing 1940s F1 style cars on Spa. Those things rocket along but steer like a tug boat. Simply amazing fun.

Forza Motorsport 6 also has practically every type of racing covered: LMP, V8 Supercars, Formula 1 and Formula E, BTCC, Nascar and Indycar just to name some of them.  Not every livery is included but with the always amazing design creator in the game you’ll be able to get your favourite livery on your car in no time.

So far I have one minor complaint – from the races I’ve done so far you have to come in the top three to progress in a series. If you don’t, you have to redo the race. I think this is a potentially a misfire of Turn 10 as they should have had a point system (like Forza Horizon 2) for each of the race series and if you do badly in one race but do great in the others, you still win the series.  The benefit of having this pole position type objective though is that you really start to learn the tracks.  This is because you are compelled to give it another go since you were so close to getting in the top three the previous race.

I also gave the multiplayer hoppers a go and it had zero lag and was great fun. I haven’t tried the new “League” system yet but what they are meant to do is help put you into an appropriate racing category after you’ve finished a few of these weekly online series.  If you race clean for example, you’ll be put into a league with other like minded racers.  This sounds like a great idea and I look forward to trying these leagues out.

Night racing provides its own set of challenges.  Not every track is as well lit as this one.

For those who are interested – there are 90 different track layouts across the 26 locations. That includes the reverse versions of tracks as well. Road America for example now has five track variations. Some, like Bathurst, obviously only have one. On top of the 90 layouts are another 10 drag strips and a couple of free roam areas, for Infection type races.  There are 460 cars as part of the full game now, which is an insane amount of cars. They all look the best they’ve ever been and with the new menu systems much easier to admire. As promised, Turn 10 has also removed any micro transactions in the game as well. You will have to earn credits and XP the normal way, plus get the bonuses available from the Forza Hub (hint – load up the Forza Hub from the Forza 6 menu for an easy achievement). When I first load Forza Motorsport 6 I was given twelve cars for free (you still have to pick up the free cars from the showroom). Eight of those cars were being Tier 8 in the Forza Hub, the other 4 were from playing previous Forza games. It is also quite easy with the new enhanced wheel spin for prizes to get more cars in your garage quickly.

Lot’s of great animations are present in your races now.  Watching an amazing replay is definitely worth doing.

I’ll say this again – the racing is infinitely better and more challenging with the newer tweaked drivatars. You don’t see one guy up the front miles ahead now either. I’ve had quite a few races now where there are two drivers tussling it out up front. This game feels so much like the great TOCA Touring Car games of old I am drooling over Forza Motorsport 6.

Normal game release is September 15th. If you decide to pick up the Ultimate Edition via the digital marketplace you can play now. I think it is safe to say though that this is an amazing effort by Turn 10 and the best Forza game to date.  In fact, it is one of the best racing games I’ve ever played. The term “drivatar” is not just a buzz word anymore, they are legitimately lifelike now in this game.

I think it is time to use a little badge my gaming friend made (thanks ZB73) as this game deserves it.

All screenshots taken in game while playing.