Tales from the Borderlands (Finale) – Ending on a high note

Telltale’s adventure take on Borderlands reaches its conclusion with the episode “The Vault of the Traveller” and not only does it deliver a satisfying ending to the story started in November last year but creates a complete game that can stand tall in comparison with the company’s best.

As we begin, the heist on Helios has taken a turn for the worse with the digital version of Handsome Jack taking over the space station and is about to make Rhys’ life a whole lot more miserable. Meanwhile, Fiona is captured and is being taken away with Sasha and Gortys, still without the final piece to the robot’s puzzle.

As expected, fortune favours the would-be Vault Hunters and they make an escape but lose Sasha and Gortys to gang boss Vallory’s goons. How it plays out could have been an epic conclusion in itself, except that’s just the beginning. The great part is the story doesn’t lose any steam thanks to some great structure and pacing throughout. It makes for a good bookend to that first episode. 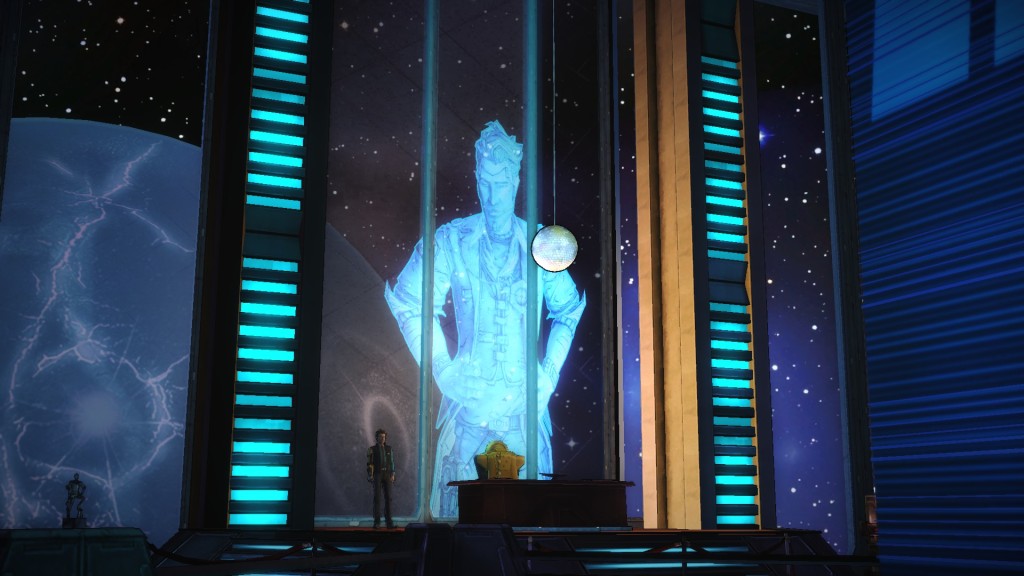 There is a moment during the course of this episode where the decisions made during the course of the previous ones will clearly influence the options you have available to you before you jump into the final sequence. It is perhaps the most game-like moment in the whole series (e.g. “You would have this if you did this”) but it does gives players a reason to play through the game again to see how differently it may play out.

Maybe I’ve become used to the mechanics in the action segments of the game but it seems in this episode the timings for key presses are a lot kinder which meant there was less need to repeat segments than I had ever had to previously. Whether it was intentional or not it does remove a lot of the frustration and benefits the story as a result.

And that must have been something that was in the developer’s minds as one of the longest action sequences in the series is here and yet it doesn’t feel like a chore at all; so kudos to them. There’s even a Power Rangers reference thrown in here too which was a pleasant surprise… but then it could also be I’ve watched far too much of it with my son lately.

One last job for Fiona and Rhys before the end…

I really enjoyed the ending as Rhys and Fiona’s tale reaches a satisfying conclusion. In addition other characters complete their story arcs, questions are answered and all done with that style of humour that makes the world of Borderlands feel like more than just a shooter. Though the final moments do leave room for a new season, a player can still walk away from this with a strong sense of closure; thinking they got great value for what they paid for.

It’s taken almost a year for us to get through these five episodes but now it’s all done I can say that Tales from the Borderlands is a great adventure that not only does justice to the franchise it is based on but makes it better as a whole.

The game was reviewed on PC but is also available on Xbox, PlayStation and mobile platforms. The first episode is now available free.