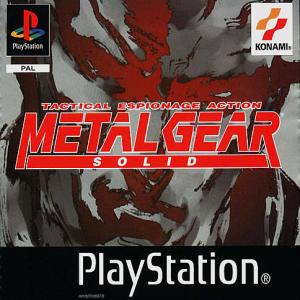 The US game package was plainer than the PAL version which benefited from character art that would remain a consistent part of the series.

With Konami marking an end of an era with the departure of both Hideo Kojima and console development at the company, it seems an appropriate time to talk about 1998’s Metal Gear Solid –  a game that stands as not only one of the best games to grace the original PlayStation but an important step in attempting to combine gaming and cinema in a way that few developers would dare try.

Initially titled Metal Gear 3 and intended for release on the 3D0 Multiplayer, the game would pick up from it’s MSX2 based predecessors but transition to 3D polygons and a new platform in PlayStation which gave the game an opportunity to stand on its own which its developers had taken to with plenty of vigour.

If the plot itself sounds a lot like action movies of the ’80s, then you’re close but as you delve further into the game you see that Kojima only used that a springboard for his own imagination to run riot. This comes out more during dialog scenes; Snake seems like the silent type at first but as the game progresses he opens up to others

What may be strange in my own case is that I never owned a PlayStation BUT I did have a copy of this game. In fact I had two copies. I first played through the PC translation (published by Microsoft) but read how it was missing things from the original version. Luckily my brother owned a PlayStation so what I ended up doing was buy myself a copy of the game (it was the “Integral” version with the bonus VR missions) plus a memory card and borrowed some time on the console when he wasn’t speeding around in Gran Turismo.

Metal Gear Solid may be my single PlayStation experience of the generation but it was a great one and lead to a lot of happy times with subsequent games in the franchise. It was also my first exposure to modern console gaming for which I’m glad I started at the top.

From the moment you take control, Metal Gear Solid would make you familiar with your radar and how best to use it. With your first goal being to sneak past guards at the dock, you are clearly show the value of the systems provided in the game.

The game’s soliton radar system allowed the player to see an enemy’s field of view which became integral to efficiently passing through areas undetected. Though it was likely created to compensate for a player’s difficulty in judging an enemy’s field of view it also helps to make the sneaking process much more like a game by more easily presenting patterns in movement within a map.

When you were attempting to sneak around, the game would highlight enemies whose normal patrol patterns were disrupted either from you being detected or from creating a distraction. The animated exclamation point flashing above their head with an alert sound is an iconic feature from the game that even made a cameo appearance in Wreck It Ralph.

Games that followed may have used more subtle methods to indicate to the player their success at stealth but MGS made it very easy for anyone to understand. Splinter Cell owes it own success to what MGS established here.

The cinematics raised the bar

From the moment you first put the disc into your PlayStation, you could see that this game was something different. It looked like someone had taken the time to storyboard each scene so that it could be presented in the most movie like fashion possible. The console’s hardware might be outdated now, but what was accomplished back then it still impressive even now. Check out the video below to see it in action.

All of this was accomplished with the game’s own engine and the occasional bit of FMV. Though character detail wasn’t enough for faces to be all that expressive (if you can call a few pixels expressive), the quality of animation was more than enough in the many action oriented sequences.

It broke the fourth wall in ways that surprised you

MGS has quite a knack for reminding you that it’s a game you’re playing. The first time I playing through I was curious about how the game required the player to manually tune their radio to establish connections with personnel.

When it was revealed in the game that a screenshot on the back of the game’s case included a new frequency to use I thought it a mad throwback to adventure games of old that would include trinkets in their boxes that would be referenced within the game. You’d feel like an idiot if you had pitched the case in the bin.

The biggest trick of all is of course what takes place during Snake’s encounter with Psycho Mantis; the telepath “reads your mind” by scanning the memory cards plugged into your console to see if it recognises any save game files which are then brought up in conversation.

Late ring the battle you lose control of Snake and realise you have to physically unplug your controller from one port and plug it into the other so as to continue the fight. This is one of those occasions when it feels like the game is playing you as much as you are it. 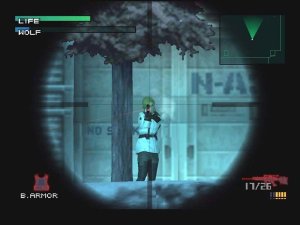 Sniper Wolf – the mother of all spawn campers.

All of the duels between FOXHOUND members are memorable but what struck me about my battle with Sniper Wolf was that an easier solution presented itself to me on subsequent playthroughs.

Normally the battle would involve both you and her facing off across a large open area talking pot shots at each other with sniper rifles. If you had diazepam you might be able to improve your aim enough to get shots in faster too. It could become a battle of patience as you tried to position yourself best to get each shot to hit its target.

But then I remembered I had a rocket launcher… and seeing it was a heat seeker all I needed to do was lock on and fire which saved me a lot of time as you could aim and find Sniper Wolf even when she was hiding from sight. This was one of the first games where I had seen a “boss fight” be solvable in more than one way and it impressed the hell out of me.

The music was good enough for me to buy the soundtrack

Tappi Iwase’s main theme for Metal Gear Solid first made it’s mark here and I felt it help set the tone and pace for the game perfectly. The theme was taken further by Harry Gregson-Williams with Metal Gear Solid 2: Sons of Liberty which quickly became my favourite version. Unfortunately the theme became absent by the time the fourth game arrived due to possible plagiarism.

Nevertheless, I own the CDs for both of these; they were some of the first game soundtracks I ever bought, and have enjoyed them a lot.

The game created a franchise

Some may think Kojima and Konami would be able to take small steps from that point on but none would have expected the leap that came with the arrival of Metal Gear Solid 2: Sons of Liberty on PlayStation 2. The game’s early trailer not only had fans losing their minds over the incredible improvements in visuals but lead to one of the biggest bait and switches ever pulled off in gaming. When it arrived later on the original Xbox, I snapped it up immediately.

Following titles Metal Gear Solid 3: Snake Eater and Metal Gear Solid 4: Guns of the Patriots continued to be games that helped make PlayStation what it is today but it seems that the series’ first true multiplatform release in Metal Gear Solid V: The Phantom Pain may have outshone them all.

Very few people get to leave on a high note but it seems that Kojima will finish his time at Konami with perhaps his greatest accomplishment ever with rave reviews and possibly some game of the year awards coming his way. After twenty years of his life dedicated to this franchise, I think he might deserve it.