Activision’s box art of the era was famous for giving players a pretty good idea of what was in store for them once the game started.

1982 was a good year for Activision; not only was there the brilliant River Raid wowing Atari 2600 gamers but another iconic game from the company would arrive in the form of David Crane’s classic platformer Pitfall!.

The game was a massive hit and is believed to be the second top selling game in the history of the 2600 with over four million units sold, second only to Pac-Man at seven million. With that success it was a pretty clear sign of what Atari lost when some of their best developers decided to leave and form their own company.

The game casts you as adventurer Pitfall Harry, searching for treasure while evading the constant dangers of the jungle. Running either left or right across screens, Harry’s search has him facing off against snakes, scorpions and crocodiles, but also navigating around logs and pits.

To add further difficulty to the game, a set of scoring mechanics and restrictions are imposed by the game. While you accrue points by collecting treasure, those same points can also be lost by mistakes such as falling down holes or being hit by rolling or stationary logs. You also start off with three lives which despite my own best efforts I’d end up losing the majority of on a single screen getting the better of me.

Finally, there is a twenty minute timer that will end the game regardless of the number of lives you have left. As a result of all this, there is a strong incentive to get all thirty-two treasure items as quickly as possible and with as few lives lost. Sounds easy, right? As you’re probably expecting me to say… no, it’s not always that easy. 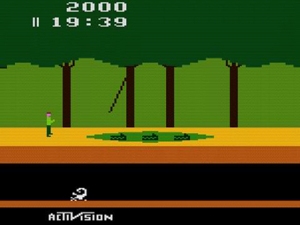 Though the level design seems simple now, it has the basic DNA that platform games of the future would build on in spades. And all games of the genre have one common requirement and that’s timing. Knowing when to leap or run means you either clear a rolling log or miss a swinging vine and fall to your death.

Whether it is deliberate in the design or not, the placement and timing of obstacles in each of Pitfall!s  screens is such that you can’t just sprint to the right while spamming the jump button and expect everything to go in your favour. It forces the player to attack each screen as a challenge in itself and I fall for it constantly.

Despite my own understanding of the game from when I first played the game via the Atari 8bit version I would quickly fall into the trap again of rushing and mistiming jumps to the point where (mentioned earlier) I’d be wiping out on a single screen. Even after all these years the game still gets the better of me. I will admit though that sometimes I’d take advantage on one quirk of the game’s design (the screens wrap around) and run left instead of right to score some treasure early.

The game was released on multiple platforms including other console and computer platforms of the era such as the ColecoVision, the Commodore 64 and Atari 8bit machines. Though versions on more capable hardware would improve the graphics substantially, the gameplay itself was entirely consistent with the original version which I think was a testament to the rock solid design of the 2600 game.

During the Game Developers Conference in 2011, David Crane presented a post-mortem of his classic game and it’s worth watching if you’re interested in the technical side of games. It provides great insight into his approach in building the game and how he achieved the task of making such a large world in a small memory space using clever tricks and procedural generation.

It’s a great reminder that games developers have innovated since the industry began and that the tricks learned back then are still relevant today. It’s also as entertaining as it is informative and one of my favourite examples of a game developer presentation.

A sequel for the game arrived in 1984 in the form of Pitfall II: The Lost Caverns which was a technical marvel on the Atari 2600 thanks again to David Crane. Not only is world very different thanks to its vertical structure but it also freed players from the restrictions imposed by the first game and allowed them all the time they needed to complete the game. It also introduced checkpoints; when the player crossed markers within the level they would be returned to those in the event of your character’s death with a points penalty deducted based on the time taken to reach it.

The changes went beyond code too with Crane designing an additional chip for the game cartridge that greatly enhanced the graphical and music capabilities of the console. The music really was something special on the 2600; I think even better than the computer versions. It also was impressive in that it switched between different themes depending on how well your character was going at the time.

There could be an argument made that Pitfall II is the superior game and is more deserving of accolades but the timing of its release after the video game crash of ’83 greatly diminished the impact that the game would have. It’s quite possible many gamers weren’t even aware a sequel existed but even then the original game casts a mighty big shadow that is difficult to ignore.

Numerous sequels have been released over the years, ranging from the 16bit style platformer Pitfall: The Mayan Adventure in 1994 to the endless runner Pitfall! released on iOS and Android devices in 2012. But none of those have the same appeal as the thirty plus year old game cartridge I picked up on eBay to add to my now growing Atari 2600 collection.