Microsoft’s Surface brand for years consisted solely of the tablet / notebook hybrid machines of which I still own the original Pro version in all its chunky glory. During that time I’ve become familiar with later iterations of the hardware, with my current work machine being a Surface Pro 4 – a product that had taken the original design ideas and distilled them down to a surprisingly robust machine with a great form factor. Recently I got a chance to spend some time with the new Surface Laptop and though it may seem odd for Microsoft to be reverting back to a design that it had previously wanted to make extinct they have really outdone themselves in producing the kind of machine that is just as desirable as anything else in their hardware line.

Weighing in at less than a kilo and a half, the machine is one solid bit of hardware with its aluminium casing. There’s a choice of four colours available depending on the model (Platinum, Graphite Gold, Burgundy, Cobalt Blue) but certainly the most understated one is the Platinum which would not look out of place in a workplace or under the arm of a business professional. From the outside it’s certainly the most Apple-like in appearance and likely to be the default choice for many users. Hardware configurations range from i5 to i7 processors, 4 to 16Gb of RAM and storage from 128 to 512Gb solid state drives. The one I used was the i5/4Gb/128Gb model which was equivalent to my Surface Pro 4 and it felt more than adequate for many users needs.

It isn’t until you open it up that the hardware differences really begin to present themselves. The keyboard with its Alcantara covering feels like nothing you’d expect to find on computer hardware which is usually the domain of plastic and metal. It’s very inviting to the touch and actually makes you want to put your hands onto it and check out the machine… something worth mentioning if you own one and show it off to other people! The other feature on opening is the touchscreen. Maybe it’s not as big a deal since the machine has a built in keyboard and touch pad but once you realise that it works just as well as its tablet cousins you might find that for a lot of tasks you’ll just reach out and tap the screen instead. For scrolling through web pages or controlling videos it’s perfect and if a user wants finer control for writing or drawing it is also compatible with the Surface Pen though you need to purchase that separately.

The screen has a 2256×1504 display that’s bright and looks great but if that isn’t enough you can hook the machine up to 4K displays via the Mini DisplayPort connector on the left side of the machine. It also uses the same Surface connector as the Pro 4 which is useful if you have a spare charger and is also compatible with the Surface Dock that gives you additional DisplayPort and USB connections. The camera above the display supports Windows Hello and at least from what I’ve seen so far works extremely well. Kudos also has to go to the team for the speakers in this thing… they’re described as “Omnisonic speakers with Dolby Audio Premium” but I’d call them Damned Awesome Speakers (TM) as they produce the best sound I’ve heard yet from mobile Surface hardware. They are strong, loud and make my own Surfaces seem feeble in comparison. That alone makes this a great machine to have on the go for watching videos, especially if you’re a Netflix junkie. 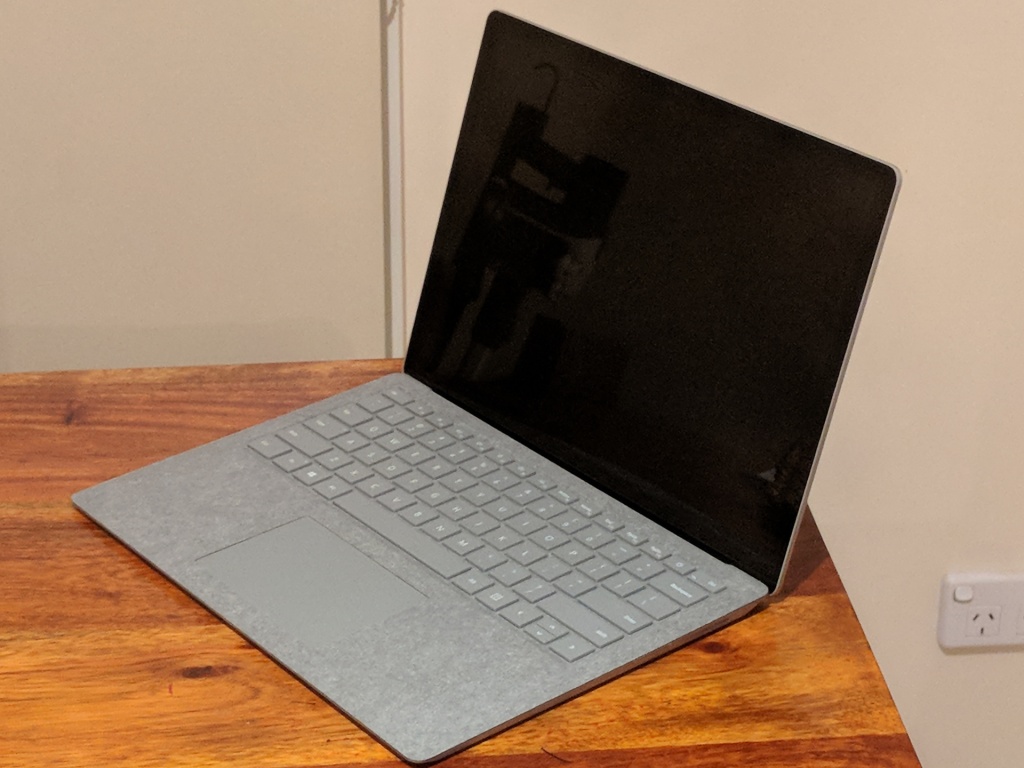 The Surface Laptop comes installed with Windows 10 S by default which restricts users to installing software via the Store which is useful for people wanting to keep some degree of “safe” control over what is running on these machines. If everything you need is available from there you probably won’t notice the restriction at all. Certainly if this is going to be operating as a work or study laptop you’ll be able to get to Microsoft Office easily enough and soon iTunes will be available through it too but if the software you need isn’t there (probably a lot of it) you’ll need to upgrade to Windows 10 Pro so that you can download and install software from other sources. The upgrade was one of the first things I’ll admit to doing when setting up this machine.

Note: Surface Laptop users wanting to upgrade from Windows 10 S to Windows 10 Pro can do so through the Store after you’ve set up your machine. Just search for “Windows 10 Pro” and an option will be there for you to upgrade. Just remember the offer to do so is only free until March 31st 2018.

It’s a little strange that the machine comes bundled with Windows 10 S instead of the Pro edition because the pricing of it doesn’t really fall into the category of what you’d expect a lot of students to be working with. I’d almost expect to see it bundled with machines like the HP Stream series that are at a price point that you’d imagine would be landing in far more student laps but those come with the Home edition of Windows 10 which does allow installs outside of the Store.

Perhaps the main gripe users might have with the machine is the lack of connectors. With only a single USB 3.0 connector as well as the Mini DisplayPort and audio plug there isn’t a huge amount of expandable options on the machine itself. Not using USB Type-C might seem an odd choice but truth is more devices support the older connector so retaining it does simplify the experience for most users. I do wish they kept a Micro SD card port on it as that allowed the Surface tablets to have a discreet storage upgrade which for many users would be all they would need in the long term.

If you’re looking for a nice looking Windows laptop that’s got everything that most users will need this is an option worth considering. There is no doubt that you are paying extra for a quality build and form factor and I am really surprised with how much I like this as an existing Surface Pro user. I was kind of jealous that I had to return it to its very happy owner because it is a pretty neat machine. 🙂