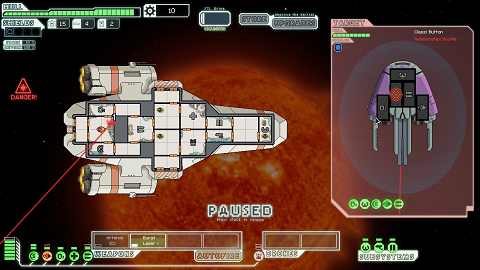 FTL – Faster Than Light was one of the early Kickstarter success stories for games funded via the service.

The plot revolves around your ship being on the run and having to cross a number of sectors before you are caught and killed. Each sector becomes more and more difficult so you need to be constantly upgrading your ship and crew to counter the threats you face.

During the game this will require the player to be able to handle resource management, ship upgrades and combat within a time frame that is surprisingly short for a game of this type (between 15-90 minutes). However, this works in it’s favour as it keeps the game focused on what it does well and avoids padding it out with anything unnecessary.

That game length may not sound long but this is a game that will punish you time and time again. And when you fail, something that will be often, you will be wanting to dive right back into it. The game maps and encounters have a degree of randomness to them, so you can’t expect to play the same game again.

If you are fans of XCOM and Civilization Revolution, you’ll feel right at home. Especially the pace of Civ Rev… much like that, this is designed to let you get a game out in a single sitting. The interface seems well designed to encourage that too as a new game is just a button click away.

Visually and aurally it is very retro. Reminds me a lot of space sims and strategy titles from the 8-bit and 16-bit eras. The design though is oriented towards modern expectations with menus that let you get to your game in short time.

This is a fun game that can be taken in short bursts or extended periods and that it succeeds so well in both is a testament to an incredibly well designed game.