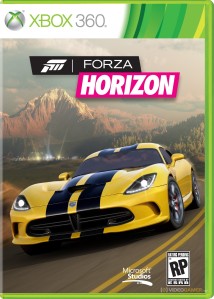 Now that Forza Horizon 2 has hit and delivered what is likely the racing game of the year, I was curious about diving back into the original and seeing how much had changed.

For me it was also an opportunity to play more of a game which I enjoyed a lot at launch but played less in the long term thanks to XCOM taking over my life for a couple of months.

I think the most obvious difference between the two from the outset is the presentation… or more specifically what is implied from it. In the original game menus and transitions try to imply an “edginess” that at face value is really only there to remind you this game is not Forza Motorsport. The sequel shows more confidence in that area with menus that are more utilitarian as the game can speak for itself.

Though the first game’s map is more confined to the roads than the sequel you don’t really notice it until the moment you lose control of a car and find an impossibly strong barrier stopping you. In FH2, the rush of plowing through the countryside with little concern for fences or bushes is a fun addition to the series.

How the core races are structured is also very different. FH has events scattered over the map that the player must travel to and earn points to unlock additional race locations. The result is lot of picking and choosing coupled with a lot of travel if players have not covered enough road to unlock the fast travel feature.

In FH2 the events are grouped together as stages in a championship with a number (around 4) located close to a set location. This makes travel between races minimal and increases the incentive to progress. Once those are completed, a “road trip” takes places allowing the driver to travel to the next location and unlock the next set of races, once again located close to each other. Though the first game does appear to offer more race options it is at the expense of providing a more structured single player championship.

When it comes to the racing itself, it is amazing just how much Playground Games got right in the first game. It’s a little less pretty and a lot less fluid but the bones that make Forza Horizon 2 such a great game are clearly visible.

The best compliment I can give is that everything I learned in the sequel could be reapplied here easily and actually made my “revisit” a better and more enjoyable run than my first time. Which has given me the perfect reason to go back and play some more.

Now, THAT is something you don’t experience every day with a game.