Three years since its historic Kickstarter success, Double Fine’s call back to adventure games of old finally delivers an experience that brings back memories of old classics but with sensibilities more attuned to modern gamers.

As a character, Vella impresses almost immediately. And she is not happy with her situation.

Broken Ages‘s story is split into two narratives. The first revolves around Vella, a girl who is about to become a human sacrifice to satisfy a monster. The second is about Shay, a boy seemingly stranded on a spacecraft with nothing but a mundane, child-like routine that he is quickly growing out of.

As you’d expect, these two stories will somehow intertwine, but it does take at least a couple of hours before some of those threads begin to show. And though you can choose which character to play through, you will eventually be required to switch at the appropriate times in the overall story.

Even if it might sound a little morbid with the subject matter, the way it is presented is nothing but that. The art style has a gorgeous, almost painted look to it that is inviting and just a joy to see in action. The main characters are quite expressive and it goes a long way towards being invested in them as you play through the game.

You can see that a lot of thought has gone into even the small things with the visual design. Both narratives have very distinct palettes that separate them from each other but also lend well to their own stories. The art style is both beautiful and imaginative.

The voice cast is excellent with plenty of familiar faces/voices including Jennifer Hale, Will Wheaton, Jack Black and Elijah Wood. Everyone has a good go of their roles and makes the game worth listening to as much as watching. The music by Peter McConnell is great; his past experiences working on adventure games is a perfect fit for the game with areas having their own distinctive themes.

One thing that is definitely a bonus is just how well the game works now with touch controls. Playing on a Surface Pro, I’m not finding any issues with interacting with the environment. A nice addition is the “eye” button which briefly highlights all interactive elements in a scene; a great way to get a similar experience to mouse users moving their pointer around to highlight elements.

That the UI is so seamless and consistent for both mouse and touch screen is a testament to a team who are endeavouring to make the game accessible for all gamers regardless of their platform. 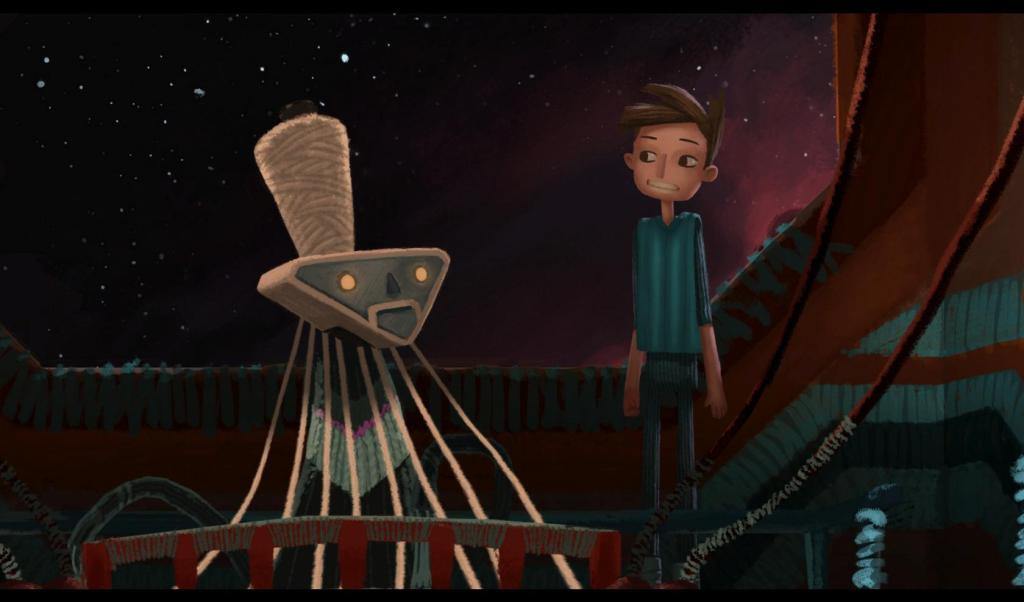 Shay’s companions on his spaceship are not your usual types.

In terms of challenge, the game has a few puzzles that may make you stop for a moment and think but for the most part there really isn’t anything that will slow you down too much early on as you play. But the further you get into the game the more it begins to lean on the more traditional adventuring tropes of doubling back on old areas and combining obscure items.

It’s worth mentioning that the additional challenge in the second half of the game may intimidate some players as it ramps up very quickly after a major plot twist. It unfortunately also puts the brakes on the game too which does impact on the storytelling success made earlier on.

If I were to use a comparison I’d say it feels a little closer to Telltale’s games in the beginning in that the game is more focused on the narrative and than the puzzles but that changes over time into more of a 50/50 split.

But like most adventure games, it’s hard to say if you’ll be willing to return once you complete it (around 8-10 hours). The focus on a singular story does come at the expense of variety so don’t expect the game to change the next time you play.

As it stands, Broken Age is a high profile reminder that adventure games don’t have to necessarily give up on classic mechanics to work for modern audiences. They may even be a much better fit now for modern audiences thanks to the prevalence of better methods of input which lend themselves more to the relaxed gameplay of titles like this and allow more focus on the storytelling.

It’s taken a while to arrive but I’m glad its here so let’s just say it was fashionably late, okay?