Assassin’s Creed Syndicate has two great protagonists, Jacob and Evie Frye. They are brother and sister and you get to control both of them in various main missions. You can also switch between them at any time in the open world while doing side missions and the usual collection of various items littered throughout London. AC Syndicate is pretty damn nice to look at, but the Xbox One version does suffer from a slightly lower resolution than normal, due to running at native 900p upscaled to 1080p / 4K. 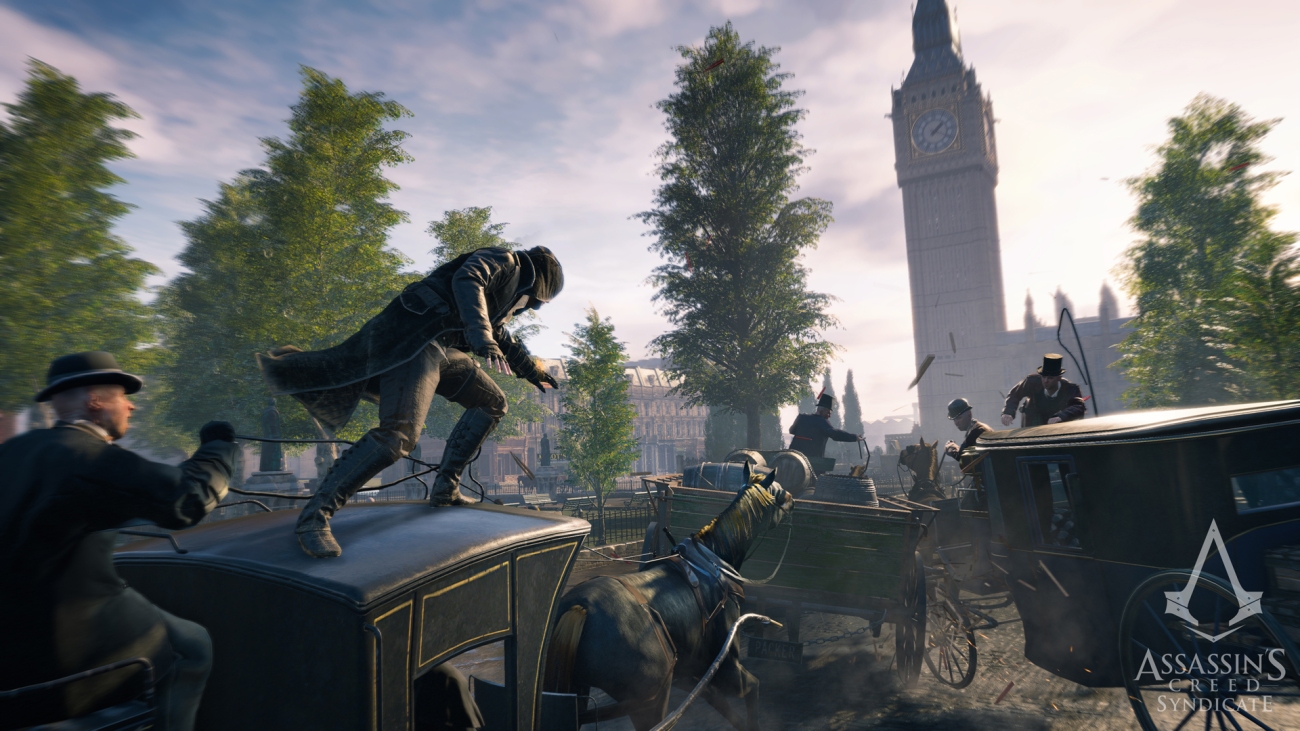 Hijacking carriages is one of the activities you can unlock in the game. You’ll be using the carriages quite a bit too.

As per usual you get to fight against the Templars, while doing various activities to make London a safer place. Things like gang wars, rescuing children from slavery and hijacking enemy carriages are all in day’s work. The present day story follows on from the original AC trilogy and thankfully you don’t really have to control anyone in the present day. You’ll see a cut scene from time to time but personally I don’t think it advances the story too much. It will be interesting to see if AC Origins actually continues to follow the path set out by this game but I have a feeling Origins might be a complete reboot.

The assassination missions are definitely the best part about this game. The level design and enemies are great. There was obviously some real thought into the main villain, and he is a knockout. There is an air of menace about him every time he is on screen. Other characters exude menace and insanity as well with one particular person who seems to have been modelled on the Heath Ledger’s Joker. Not that this is a bad thing, it certainly adds an element of instability to the proceedings. 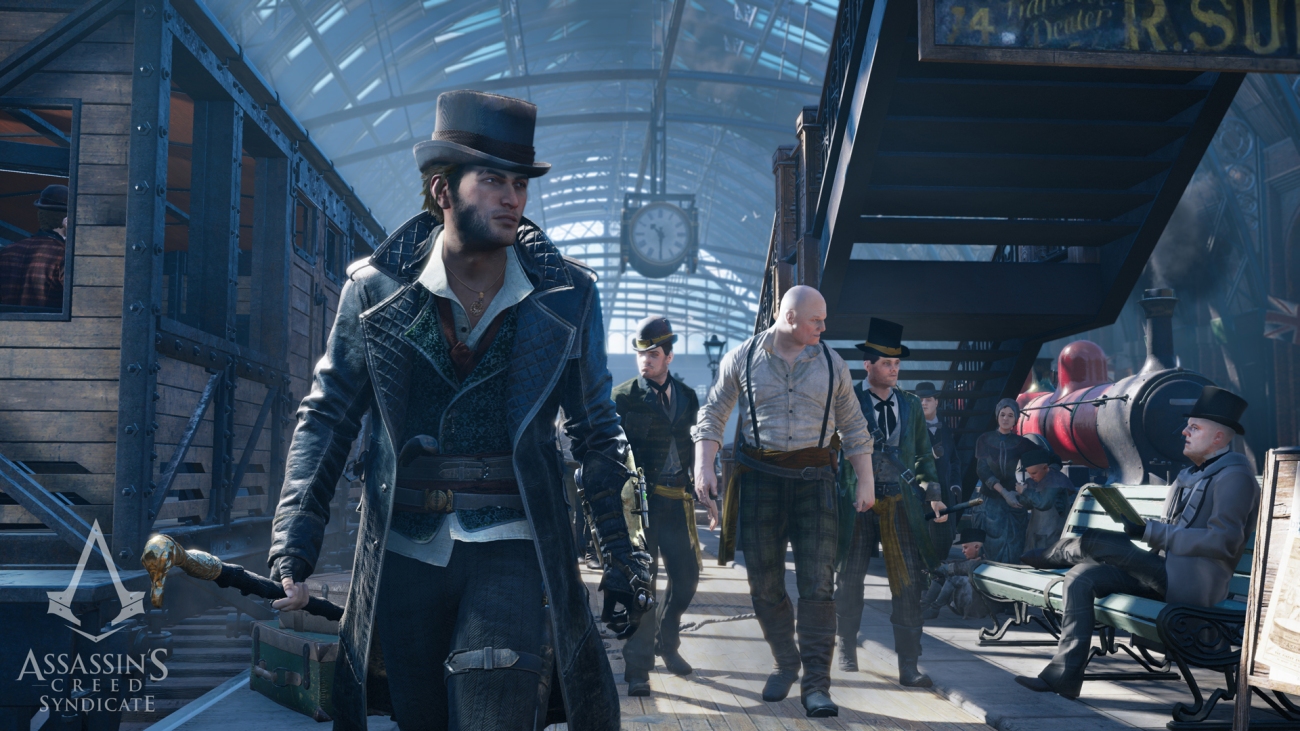 You can improve your gang, the Rooks, by crafting upgrades and paying some decent coin.

While the assassination missions are great, there does also seem to be a fair share of filler missions too. Sometimes the gameplay just doesn’t work either and at times you’ll probably pull your hair out in frustration. The game mechanics have been tweaked a little from AC Unity, but I’m not convinced it was for the better. For example, you can now parkour down a building quickly by holding B with the right trigger (instead of the usual A button). This seems to me to complicate things a little.

Being set in 1868 though means you at least have good back up weapons, like a pistol. There is also a nifty pulley system that operates off your arm that allows you to traverse very quickly from rooftop to rooftop. 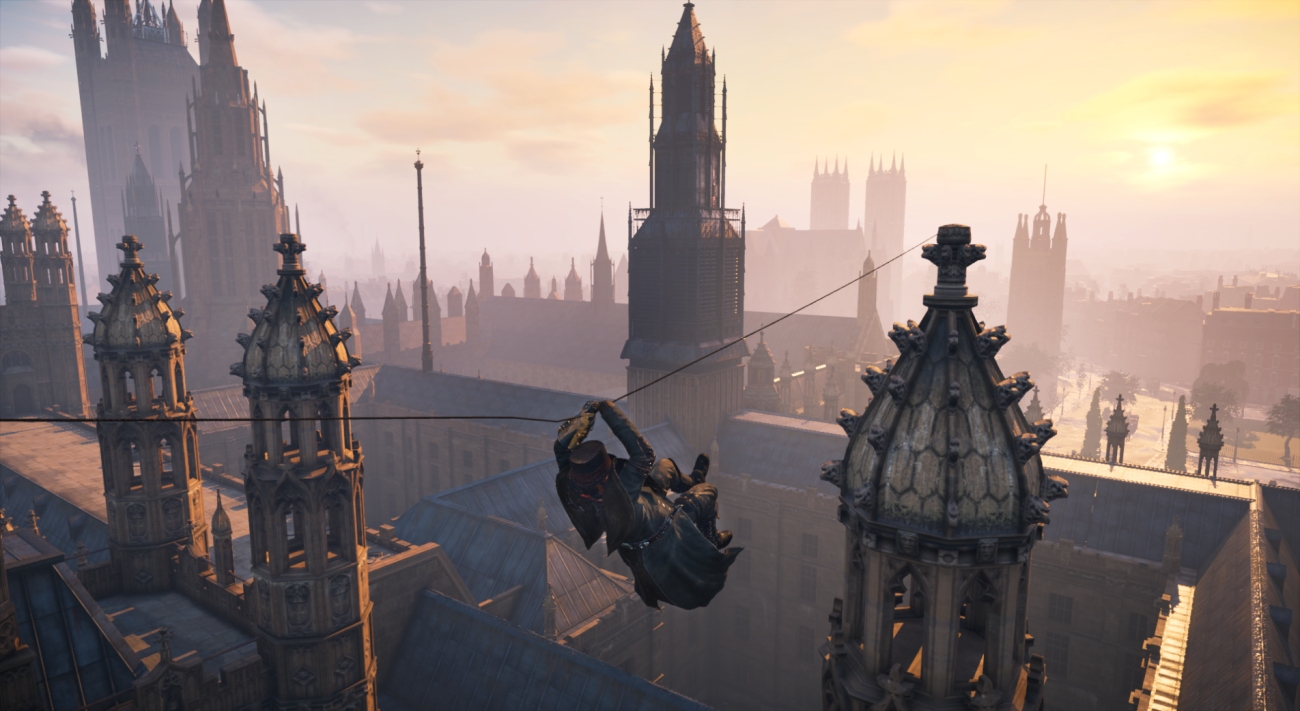 You can craft items too and for most part this works really well. The old micro transactions do rear up from time to time, but you don’t have to buy the Helix credits if you don’t want to. It just means you have to hunt for a lot more chests to craft any of your weapons, tools and gear.

On the downside though, I still ran into some weird bugs, two years after initial release. In one cut scene Evie was missing altogether but clearly was meant to be there, to the point where the person she was conversing with hands her an item, which walks around in invisible air. During the course of play I had three crash to dash errors as well, but luckily it had saved part way through a mission. One annoying design choice was not being able to fast travel during a mission.

Assassin’s Creed Syndicate is definitely worth a play, and I’m glad I played through it before I start on AC Origins. The characterisation and main assassination missions are top notch, even if they hand hold a little bit too much and have some filler missions.