After a successful Kickstarter campaign and Game Preview in 2016, Rockfish Games’ roguelike space shooter Everspace launched earlier this year and I’m happy to say that it delivers on what I saw back when I first previewed it. There’s a good chance I will go over familiar ground here but it’s also been more than a year since I dived into the game. The content has been bulked up a lot since its May release and I think it deserves much more of my play time now to see how it has shaped up.

Looking at it superficially, Everspace is an arcade style space combat game that tasks the player with navigating through multiple zones to reach their destination. But that description barely scratches the surface of what we have here and would be a complete disservice to what the developers have accomplished here.

If I were to describe the game like a recipe I’d say it takes the base of a roguelike such as the excellent FTL, throws in some RPG elements, difficulty curves and even corpse runs of a Dark Souls for flavour and tops it off with some old school frenetic space combat that could even be traced all the way back to the original Star Raiders. 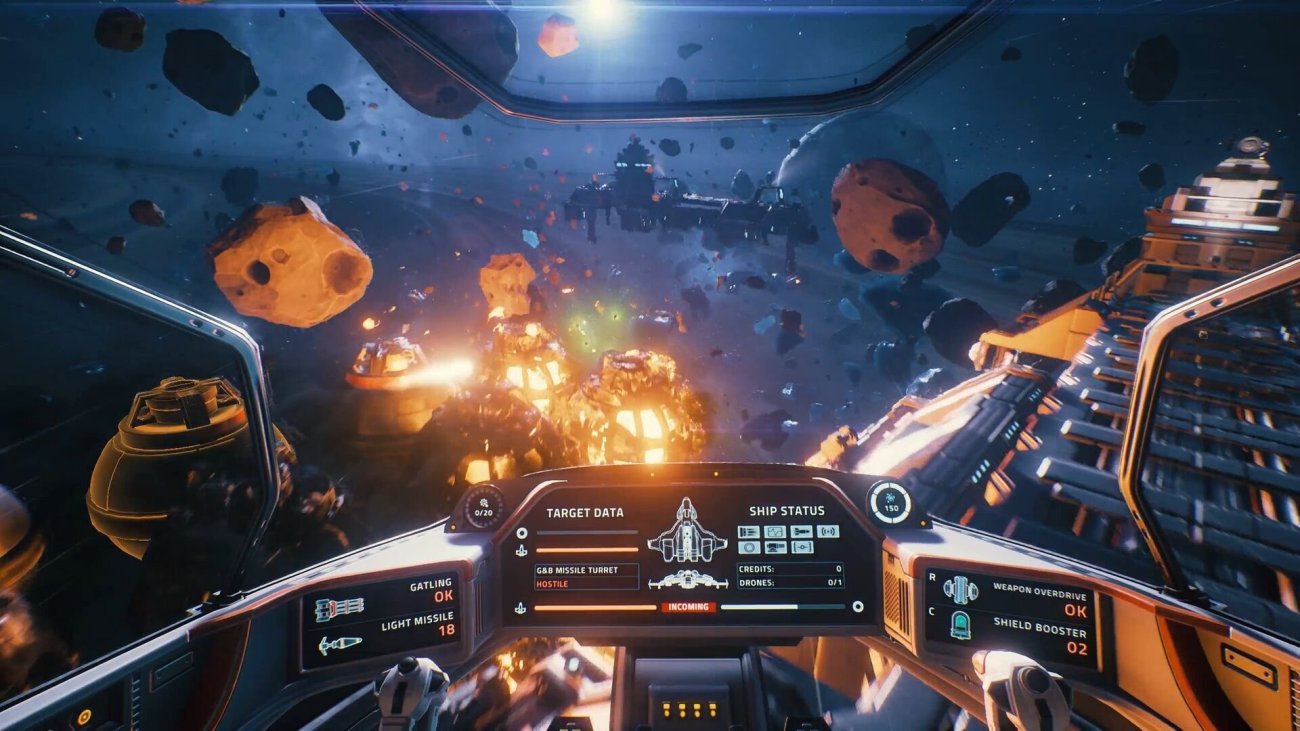 The cockpit view is optional but works well for anyone who misses Wing Commander, X-Wing, etc.

Like FTL, the player travels through a set of randomly generated stages where they encounter both friends and enemies, to reach the jump gate which takes them to the next sector and another set of zones to traverse. But where that game was played out via a 2D view of your ship interior this one is a 3D space sim that lets players fly through the game world as they see fit. As you work your way through stages you accumulate credits and resources. The former is used to invest in perks that boost your abilities for your next run and can even purchase ships too if you save enough. The latter allows you to craft gear (based on what blueprints you have) during your run as well as repair ship systems damaged on combat. Every little bit helps and being able to scrape your way through to another sector feels like a well deserved achievement… and it is!

How the story plays into the game’s mechanics is a nice touch as it ties perfectly into the whole “play, die and repeat” routine with a sci-fi focus that makes some sense. You know little about your situation at first but as you progress further the story begins to reveal itself. And there’ll be quite a few fatalities thrown in there too. For everytime you die though you accumulate all the neat upgrades you’ve collected so far during the course of each attempt which will eventually allow you to progress through to the end. The game also keeps count of the number of attempts you make for those wanting to keep some semblance of a score.

This approach to playing the game, where dying is part of the mechanic, may not be everyone’s cup of tea. If you’re a single playthrough kind of gamer that’s not going to work here unless you want the game to last five minutes. You’re going to have to be willing to accept that you will fail quite often before any progress is made.

If you are willing to accept that kind of punishment it is easy to get another in the game for a few hours as Everspace does a great job of throwing enough random elements in your direction to make it feel that every attempt is unique. There’s some great touches in there too such as when you unlock the perk that allows you to this game’s version of corpse runs it will ensure that you visit the appropriate location from where that death occurred. It ties in perfectly with the narrative too which I think is great.

That big structure you ahead of the ship? You can fly right through that. 🙂

The visuals continue to be a highlight with some inspiring locations that you will visit during each attempt. Much like the designs used in No Man’s Sky, the art of Everspace evokes the kind of imagery you’d often see on the covers of sci-fi literature and it is all the better for it. The graphic novel style cutscenes are nicely done too – they’re used sparingly when you accomplish certain objectives within the game and serve that purpose well.

Though it might seem arcade like in its presentation, the controls are quite complex with both thumbsticks used in flight. In my case I soon changed the default setting so that it matched what I was used to in Elite Dangerous with the lateral movement on the right stick. Even with the consistent control scheme I’m still finding that the game is giving me an education on how to be able to make the most of it. If I ever get really good at flying I’ll likely find it’ll apply well to any games that use a similar control system.

The nature of the game actually makes it good for players who need an experience that can be played in small bursts. At least for me as it stands now I’m not living much longer than ten to fifteen minutes a turn so even an hour is getting me through a few attempts before I take a break. Being able to leverage Xbox Play Anywhere (if you buy the Xbox One or Windows 10 versions) and take your save with you between platforms is a nice little bonus for gamers with access to both.

If you’re in a mood for Star Wars type space battles and have the persistence to accept that failure is going to be key part of your progression then Everspace might be the game for you. It’s a beautiful looking game that revels in its influences and succeeds so well in implementing them it might just convert new players in the process.

Everspace is out now on PC and Xbox One. Reviewed on both using Xbox Play Anywhere.