The Golf Club 2019 – Featuring the PGA Tour (TGC 2019) was one of my most anticipated titles for 2018. What made the digital release even more interesting is that HB Studios refused to give a specific release date leading up to launch, apart from assuring gamers it would be released in August. The developer were always very communicative and supportive via social media, and responded to as many tweets as they could. I can say from personal experience that this built the anticipation for the game quite nicely.

A few days before September commenced, the game was released on PC, PS4 and XB1. I can safely say it is one of the best video games of golf to be released, and certainly the best in the last five years or so. It improves on everything that was good about The Golf Club 2 and updates the graphics and sound for current consoles. This review is based on the Xbox One X version of the game, and it looks suitably impressive in 4K. 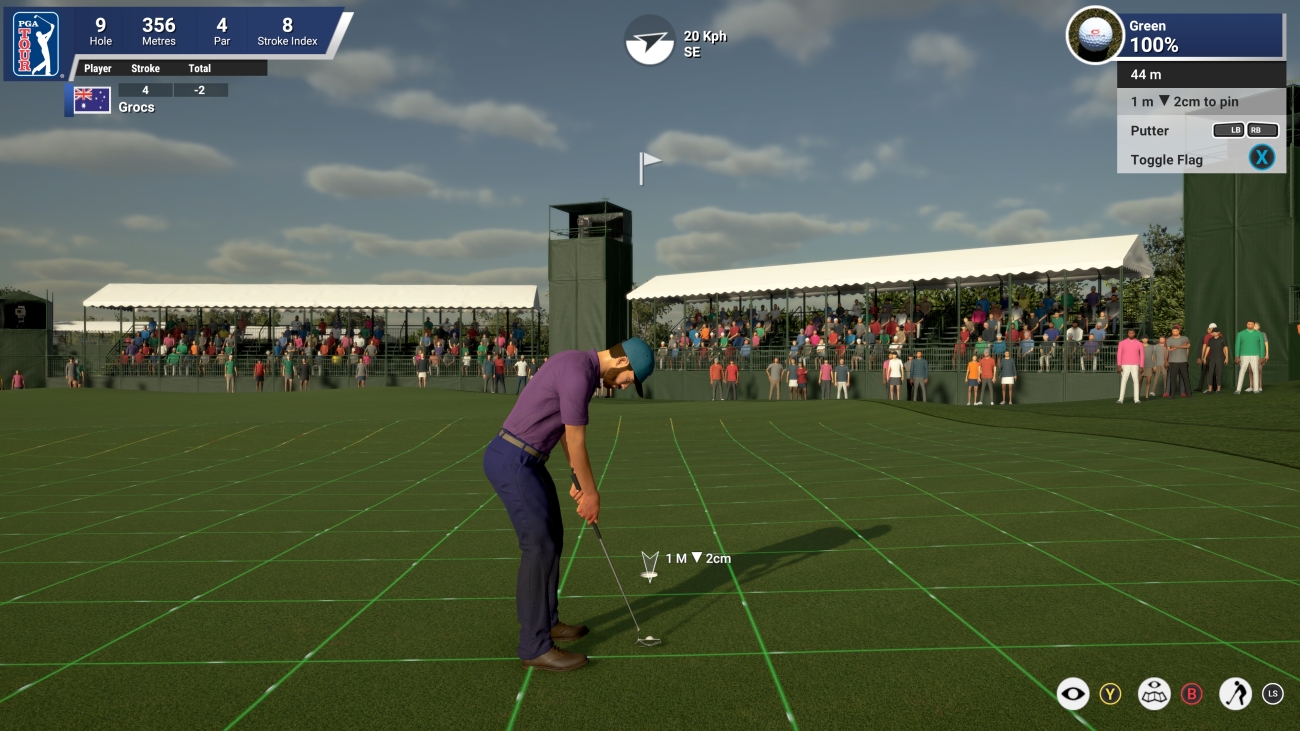 Modest crowd here, but you can get some packed out stadiums in TGC 2019.

So what makes this game a great representation of golf? It is just amazing how much detail is given to the physics of the ball, and how even the slightest incorrect tempo can affect the ball flight. I don’t think I’ve ever played a game of virtual golf where the pressure of trying to keep that two stroke lead actually causes you to fall apart and lose a hard fought PGA event. Even the famous 16th hole at TPC Scottsdale, with the huge stadiums and crowds, becomes intimidating. It is on this hole that I lost my lead with a double bogey and subsequently lost a tournament. The pressure of the crowds actually got to me, so impressive is the atmosphere. 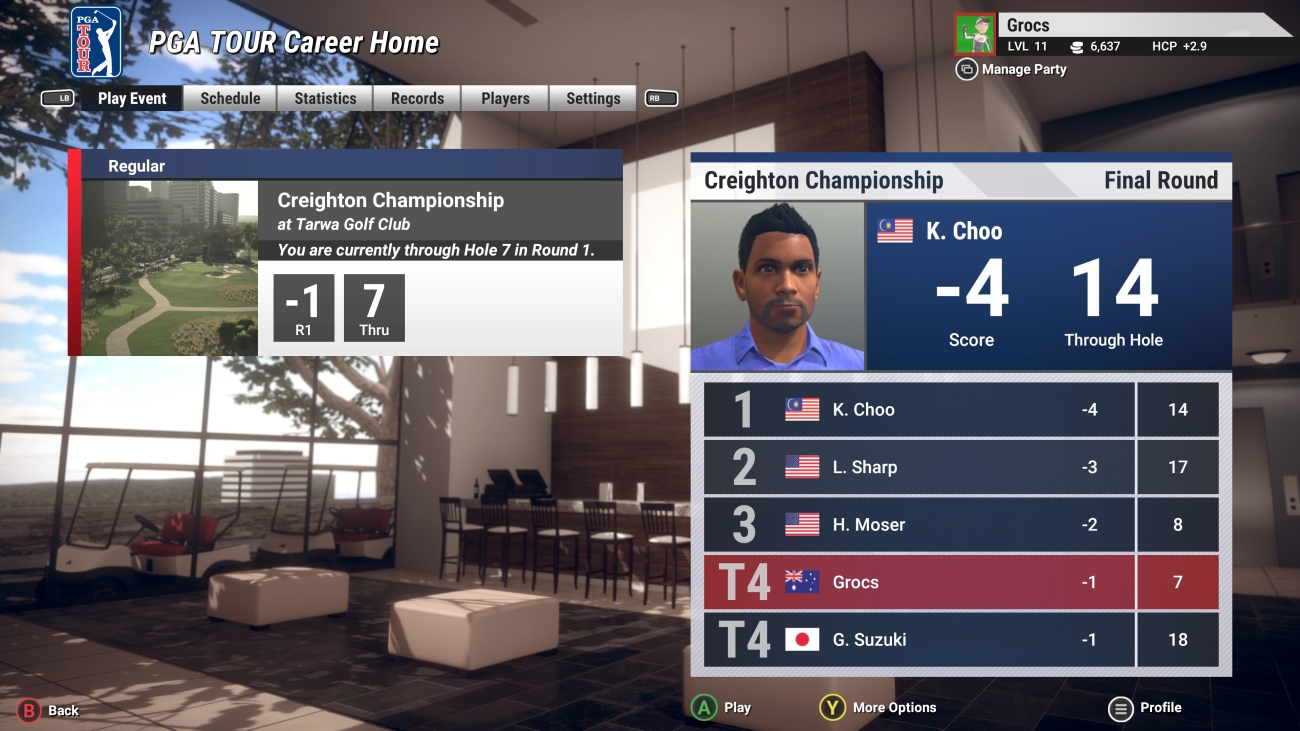 You can also save a tournament or round part way through, so it allows a quick few holes to be played.

The game is accessible for new players as well, and has a decent series of tutorials to introduce you to the mechanics. You have a lot more clothing and club customisation now too. Some name brands, like Under Armour, have made their way into lineup now. Just as in previous games, this will not give you some magic statistic to make you a better golfer. Everyone still has an equal playing field, and you can still choose between Standard, Pro and Master sets for the clubs (think High to Low handicap type options). Obviously if you dial in a shot using the Master set, you’ll hit the ball further and with more accuracy. If you miss the shot via incorrect tempo or the line, it is going to be potentially out of bounds or in the water.

There are so many courses to choose from, thanks to the series excellent course creator, you will never run out of challenges. Because HB Studios acquired the PGA Tour license, we now have six official PGA courses to play, including TPC Sawgrass and TPC Scottsdale. These official courses are included in the new single player career mode, that starts you qualifying in Q-School before moving onto the various tours. You can set the difficulty of the tours too, which is a nice touch. The Fed Ex cup is also included in the game, which gives you something else to strive for.

Note the tempo gauge on the right. Perfect and straight is what you should be trying to achieve. Master clubs makes this harder to do.

The sound is much better this time round. When you hit the sweet spot on a driver it sounds great. The commentary overall is good, although the addition of Luke Elvy doesn’t really add that much to the game. This is mainly because he only says a line or two at the start of a PGA event, halfway through, and then at the conclusion of the round.

Playing online seems to be a much smoother experience with TGC 2019, and setting up a private match is much easier. You can now lock turn based play from the start, which is a far better system than what we had with TGC 2. Simultaneous play is still available for the game types that support it, like stroke play for example. You also have some more camera angles to work with, particularly in turn based play, which is also a nice touch. Online societies also make a return, and provide a good challenge to try and get ahead of what other real players have scored in the events.

The game is still running on the Unity engine, which has improved in a lot of ways from the previous iteration of the series. Still, I find some odd pausing and slow down from time to time, however this doesn’t affect gameplay. There are some smallish bugs still present but I am sure HB Studios will continue to improve their best game yet. This time the game has been published by 2K (publisher of NBA2K, Bioshock etc). I think this is a good move as far as reaching a bigger market.

You really strive to try and get that top spot, and the difficulty can be adjusted to suit players of all skills.

TGC 2019 is a great golf game. This is the closest to a true representation of golf as I’ve ever played. Tempo is such an important part of the game (I play the real golf too) and it is great to see it work so well here. I’m keeping my fingers crossed for more official courses, including Augusta, and continual optimisations to the game. If you like a decent simulation of golf, you’ll love TGC 2019.