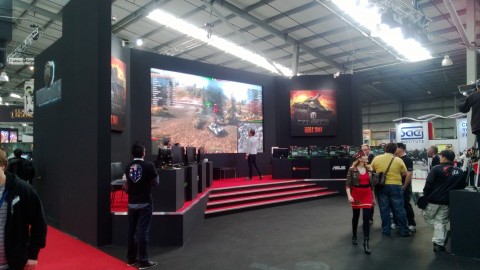 Today I decided to take a different approach and devoted the majority of my time to the Expo Hall. Perfect for me as now have a good chance to look at some games in detail.

First up was World of Tanks. Their exhibit was huge and attracted big numbers thanks to the games running and the friendly staff bringing in curious bystanders. The game fits into the easy the learn, hard to master model requiring a degree of commitment to get far. But I can see the fun in it and I’ll be getting online with it soon.

Next, I went through the indie booths to check out further titles. Over the last three days I’ve seen some cool stuff. Most interesting has been:

Framed – with a retro art style and a great premise, I can see this being a fun game for anyone. Basically, you have help the main character navigate through comic book frames by ordering them around the screen in a way that lets him get to the end safely. It plays almost like an interactive cartoon and I completely loved the look of it. Due for release at the end of the year.

The Last Stand: Dead Zone – a browser based zombie game with a classic Fallout vibe to it. I could see this catching on with fans of Left 4 Dead and not those text based browser games.

Antichamber – considered a game much in the vein of puzzlers like Portal, the stark visual styling really makes an impression.

Lunar Flight – Lunar Lander for the 3D generation. I swear the moon looks like something straight from the movies and judging from demo screens of users playing it via the Oculus Rift, the game really puts you in the pilots seat.

Toy Mania – a neat puzzler that has shades of Bejeweled but with a cute and fluffy skin. This is another I could see running on phones everywhere.

Cargo Chaos – help a cargo ship by stacking its cargo well enough to survive the trip. One of those you need to see in action and it will put a smile on your face.

Infinity Wars – an entirely digital card game with a great level of presentation. Fans of Magic the Gathering and the like will be right at home. I might make me a fan too.

Gamebook Adventures – classic Fighting Fantasy novels are being converted to an interactive format. First up is Forest of Doom.

MacGuffin’s Curse – a puzzle adventure involving a character who can switch between human and werewolf. Retro styling will make you think back to the 16bit days.

I also got to see a presentation of Total War Rome II. A demo battle was played through with the Egyptians versus the Romans, showing both land and seas battles. Seeing soldiers jump ships as they were sinking was a neat touch.

The League of Legends stand was packed. Always.

I also spent a little time in the retro gaming area, finally getting to do something I wanted to do years ago… play Tempest 2000 on an Atari Jaguar. The hardware might be dated but game still shines.

Beyond the exhibits, I’ve really enjoyed the vibe that’s been a big part of the while event. Its been awesome how conscientious everyone is. People queuing up are polite, there’s hardly any pushing, everyone uses the bins and the bathrooms are treated with care and are amazingly clean. It almost makes the queues worthwhile… well… almost!

The Omegathon final capped off what may have been the most consistently enjoyable day of the event for me. So my advice for future PAX attendees: enjoy the moment and take any sessions you can get into as bonuses and not your main reason for being there.