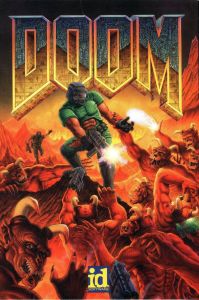 With the impending arrival of a new game in May, it seems pertinent to look back at the original DOOM (gotta love that all caps in-your-face title) and how it flipped gaming on its head in a way that is still being felt today.

Developed by id Software and released as a shareware title for DOS PCs on December 10 1993, DOOM centred around your character (the now typical space marine type) trying to beat Hell’s minions after they’ve taken over a base on the planet Mars. Initially equipped with only a pistol and your fists, you have to collect new weapons and armour as you progress so that you can tackle the ever increasing amount of dangerous enemies.

Like Wolfenstein 3D the game was broken up into episodes that were further divided up into smaller “missions”. The first episode was available for free; named “Knee Deep in the Dead”, it was a showcase for the game and an incredible deal for players who could experience a sizeable amount of content without spending anything.

Those who were to pay the shareware fee would get access to the episodes “The Shores of Hell” and “Inferno” which completed the (however miniscule) storyline for the game. Later on an additional episode called “Thy Flesh Consumed” would be included as part of The Ultimate DOOM update and was intended as a bridge between this game and the sequel DOOM II.

DOOM’s title screen would have been a very familiar sight to millions of PC gamers during the 1990’s.

The game was a technological leap over id Software’s previous game Wolfenstein 3D in terms of level complexity and features. Levels were much more detailed in their layout and shape that allowed for a much more detailed world to explore. It still wasn’t considered “true 3D” as their arrangement was still flat due to a limitation of rooms not able be built over each other. However the use of elevation made it possible to create layered areas that could hide that deficiency quite convincingly.

Even with the game pushing the graphical envelope of the era, the developers still aimed to give as many players the opportunity to play it on their PCs; this was achieved using the Wolfenstein 3D method of decreasing the size of the viewing window which reduced the amount of pixels needing to be rendered out for the game world. It may seem like an archaic thing to do now compared to adjusting resolutions, antialiasing and texture quality but this was a very effective solution that was easy to understand. And for many just the smallest of tweaks to that window size could get the game running perfectly.

Clever use of lighting and sound made for a very immersive experience. Often you’d hear distant sounds and find yourself in a flickering hallways or darkened room which would suddenly light up as wall panels slide away revealing new rooms and groups of enemies. Though these moments were not too scare inducing, players could still find their adrenaline levels going up as they dodged and shot their way out of these situations.

Playing DOOM in a smaller viewport… the method used by many early players in their bid for maximum performance.

With the exception of key cards for unlocking doors, that whole opening mission (E1M1: The Hanger) does a brilliant job of demonstrating what the game offers. There’s collectibles, directed enemy encounters, hidden rooms, switches to raise and lower areas and enemies that could teleport right in your face. If you were successful enough with your secret hunting you might even be better prepared going into the next mission.

It’s so successful in communicating these parts of the game that it could be looked at as being the first person shooter equivalent to Super Mario Bros. World 1-1. I know that’s high praise comparing DOOM to Nintendo’s own masterpiece but I can’t think of another shooter that explains itself so effectively in such a short space of time.

The weapons at your disposal would become staples in shooters for years, with shotguns and rocket launchers having very clear behaviours and results such as splash damage for the latter. There was also clear level of progression with the weapons in terms of damage each could deal out and thanks to the projectiles and damage being easy to identify players could determine counters using their own inventory.

This detail came in very useful in the game’s “deathmatch” multiplayer and would also become a key factor in the Quake series of games also developed at id Software. It’s sometimes easy to forget that one of the most popular forms of online competitive gaming had its origins here and even though it may be considered basic compared the military shooters of the modern era it still a mechanically sound game that makes it easy to pick up and play.

After more than twenty years since its release the game has been ported to numerous computer and console platforms including Linux, MacOS, PlayStation, Saturn and Gameboy Advance. In addition there are open source versions of the game engine such as ZDoom that take the original game’s data files and run them on modern hardware and operating systems.

The version for Xbox 360 (and Xbox One via backward compatibility) even supports multiplayer locally through splitscreen or online via Xbox Live which goes far beyond the network capabilities of machines back when the game first arrived on PCs.

DOOM on the Xbox 360 allowed splitscreen multiplayer which is a perfect fit for the game’s deathmatch mode.

A year after the game came a sequel in DOOM II: Hell on Earth which pushed the original game’s engine further with more intricate levels whilst also including conveniences such as carrying your inventory throughout the whole game (DOOM only allowed that for missions within an episode) while also introducing players to the double barrelled shotgun and its status as the ultimate short range firearm.

DOOM‘s release and popularity was not without controversy as the satanic content was often criticised as much as the graphical violence. Even Easter Eggs in the level design were not safe as the case was with a room in E1M4 whose inner walls would slide down to reveal the shape of a swastika (intended as a reference to Wolfenstein 3D); these walls would later be replaced through the ironically numbered 1.666 update to the game.

The worst of it though came from the unfortunate incident at Columbine High School six years after its release. Having one of the killers turn out to be a fan of the game became a PR nightmare for the whole games industry that would take years to subside.

Ten years later in 2004, Doom 3 would set a new graphical benchmark for PCs with its detailed incredibly levels and characters but at the expense of the game’s own pace which became more survival-horror than guns blazing shooter. The original Xbox version of the game would end up trimming back parts of the levels in an attempt to help keep things moving and it succeeded to a degree but the game would eventually wear you down with its excessive use of “monster closets” (enemies spawning near you or from behind a concealed panel) which became sadly predictable.

The upcoming game simply titled DOOM is due to arrive on May 13th 2016 seems intent to bring “run and gun” style shooting back to the series whilst upping the carnage to levels that the original game’s designers couldn’t have dreamed of back in 1993. After so many years between games in the franchise, it will be interesting to see if the 2016 version of id Software will be able to deliver an experience that reminds gamers of who was king of the shooters back in the old days.