When the 32bit consoles arrived in force in the early to mid 1990’s they also ushered in a new generation of impressive polygonal based games. One thing that was missing from these new titles though was a true character indicative of the generation.

The last had Mario and also introduced Sonic but despite best efforts by Sony for their new PlayStation console, Crash Bandicoot didn’t quite have that same pull. However towards the end of 1996 a team of developers from the UK came up with a character and game that would make their work become a pop culture phenomenon and become a key franchise for PlayStation too. 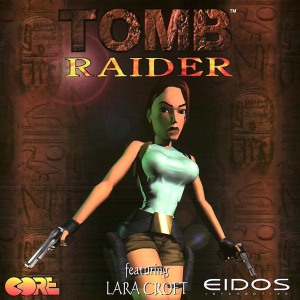 Developed by Core Design (Switchblade, Chuck Rock, Thunderhawk), Tomb Raider was a polygonal action/adventure that could almost be seen as a highly evolved 3D version of their own hugely popular 8 and 16bit platformer Rick Dangerous. This time around though the character no longer resembled a well known movie adventurer/archaeologist.

Playing from the third person as Lara Croft, you have to guide her through varied environments and puzzles as she searches for ancient artefacts tied to the lost city of Atlantis. As she soon discovers, there is much more going on than finding lost treasure.

What was remarkable about the game was seeing how fluid it was in action. Not only was movement through the levels mostly smooth but the character felt more than capable of traversing it too. Lara could easily leap over obstacles, climb up walls and somersault over enemies whilst firing her weapons thanks to some generous auto targeting. It wasn’t totally perfect though as there were quite a few jumps requiring the player to line jumps but once you understood the limitations it made sense within the game.

A neat little touch was that with some of the larger leaps to ledges Lara would make a dramatic last minute grab before pulling herself up. There may not have been a real danger of the player missing but it was effective in adding some drama and thrills during some of the more complex areas that you’d have to guide Lara through. But if you did miss one of those epic leaps, there’d be some nasty deaths in store for you not as the developers weren’t afraid of killing you off quickly for big mistakes. Try taking a swan dive off a high platform into the ground and see how that works out for you. 😉 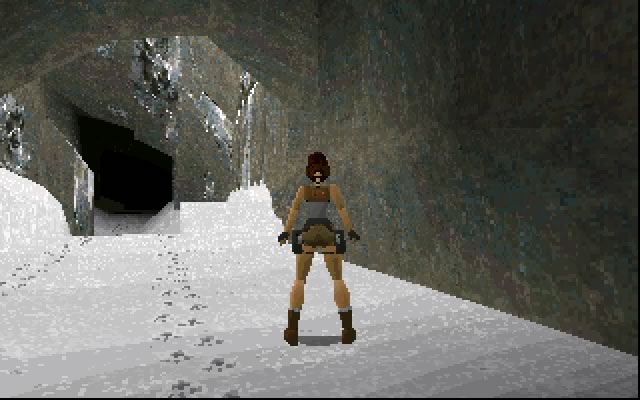 Much of you time is spent following Lara through caves and temples. PC VGA version.

It might seem strange to say this but two of my most memorable sequences in the game are actually not direct parts of the campaign at all. The first is the training level which is based in Croft Manor, the spacious home of our hero. Not only is it a great introduction to the games various controls but in its own way becomes a vehicle for filling in some blanks about Lara’s own backstory. That she turned an old mansion into a dojo and climbing gym probably makes that fairly clear. The sequels would build out this level further and introduce new areas and secrets making each worth visiting again and again.

The second area is a fun little distraction in the “Lost Valley”. With the film Jurassic Park having brought dinosaurs back into prominence a couple of years earlier, having a secret area where Lara could face off against some of that film’s creatures is a bit of fun that’s not integral to the game but provides one heck of a big moment in the process.

The game launched first on the Sega Saturn, followed a month later by the PlayStation version and later on the PC. It’s success on PlayStation at the time ended up tying it very closely with the platform for many years. It wasn’t until a decade later that a game in the franchise would appear on Xbox with Tomb Raider: Legend.

Most of my time playing the game was via the PC MS-DOS version which offered some nice graphical options over the consoles. Not only was there the standard VGA display setting but the game also had a Super VGA mode which doubled the resolution making it a very sharp looking game at the time. Leaving that in the dust though was the update which supported the Glide API and allowed it to leverage my 3Dfx Voodoo. The improvements to lighting and shading, the impressive underwater effects and the boost to fluidity of movement made Tomb Raider a very good advertisement for a 3D accelerator card. Once I started playing it this way I could never go back to “just VGA”. It’s certainly the version I would recommend you play.

During that time LucasArts even attempted to bring Indiana Jones (who influenced both Tomb Raider and Rick Dangerous) into his own game with Indiana Jones and the Infernal Machine in 1999. Though the game offered sprawling areas, a story from the same minds that were behind the adventure games and action you’d want from the character it suffered in the controls department as the game was built on an engine (used in Jedi Knight) not really intended for 3rd person games.

Indiana Jones and the Emperor’ Tomb would come later in 2003 and resolved a lot of issues thanks to building on a foundation (from the developers of the Buffy the Vampire Slayer game on Xbox) that favoured 3rd person action that fit the character well.

Core Design would go on to produce five additional games of which my favourite was the direct sequel (1997’s Tomb Raider II) which I thought did all the right things you hope for in a sequel by bringing in new environments and a few new tricks too with vehicles. With games being released yearly, innovation started to play second fiddle to schedules and the games began to suffer. Unfortunately the buggy release of Tomb Raider: The Angel of Darkness in 2003 brought the franchise and Core’s involvement to an end. 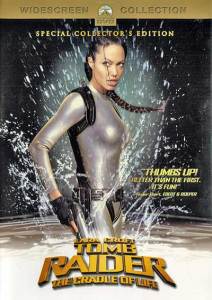 You don’t need to see this… trust me.

As well as games, there were also a couple of Lara Croft: Tomb Raider movies that starred Angelina Jolie as Lara. Though she quite easily filled the role it was a shame that the movies themselves went on a quick downhill slide in quality. You certainly won’t be seeing Daniel Craig (in the 2001 film) or Gerard Butler (in the 2003 sequel The Cradle of Life) listing them as career highlights. Even now the death of the movies is being attributed to the reception to The Angel of Darkness… though when you watch them now you’ve got to admit they kind of sucked.

As the series sat in limbo, it gave other games opportunities to step in and provide similar experiences. There’s Ubisoft’s Prince of Persia: The Sands of Time (2003) which made platform puzzles both beautiful and graceful. Most impactful though was Naughty Dog’s Uncharted: Drake’s Fortune (2007) which created strong characters and story, tossed in with some of the most impressive visuals of the generation.

Poor old Lara just wasn’t comparing well. Crystal Dynamics became the franchise’s new developer and the releases of Tomb Raider: Legend (2006), Tomb Raider Anniversary (2007) and Tomb Raider: Underworld (2008) went a long way to bringing Lara up to date mechanically but Uncharted (once derided as “Dude Raider”) brought the visual spectacle and that left Tomb Raider in the unfortunate situation of being compared to the “copies”.

However all that changed when Crystal Dynamics went back to the drawing board with their Tomb Raider “reboot” which stranded Lara on an island struggling to find not only the truth to its mystery but a way off it. Discrete levels were replaced with a large environment that felt like it stretched forever and could deal death to Lara in some fairly brutal ways. If a game could achieve the term “open world survival/horror” this was it. It was the reboot that fans may not have expected but it is the one they deserved and is worth checking out.

The brilliant Rise of the Tomb Raider is confirmation that the new direction taken by Lara’s custodians is the correct one.

If that wasn’t enough Rise of the Tomb Raider arrived a year before the franchise’s 20th anniversary and much like the original game’s sequel delivered an even bigger adventure that succeeded by building on what made the reboot such a fantastic reinvention of the franchise. And with a new movie coming in 2018 what else can be said but Lara is back.