HB Studios released the original The Golf Club about two years ago in line with the functional, but underwhelming, Rory Mcllroy PGA Tour. Even though The Golf Club was a bit rough around the edges and had a distinctive indie game feel about it, the game did a lot of things right.

One of those features was a full handicap system to help even out the playing field in virtual golf, just like the real thing. The other great feature was the Greg Norman sponsored Course Designer. The mechanics and physics were pretty solid too, but it was let down by pretty sub par graphics, particularly on the Xbox One version of the game, where it only managed 720p native resolution.

Maximum Games has teamed up with HB Studios to release The Golf Club 2 as a true current generation golf game, which I am happy to say is easily the best golf game in the last five years.

Multiplayer is great, even if a bit fiddly to setup.

The presentation is much nicer, the UI seems to have a AAA game feel to it. The physics and swing of the club using your controller has been vastly tweaked and is even better than ever. You will feel pretty great when you nail a decent shot, particularly on some of the harder courses. The handicap system is still in place and as good as ever. For those who don’t know much about golf it means you get additional strokes (or less) depending on what your handicap is. In a recent tournament with a friend even though I shot -5 under par (a good score, 5 shots better than the course average, or par) it wasn’t good enough to win the match. My friend shot a +25 over the four rounds but because he had a handicap of 13 this effectively gives him 52 additional shots over my scratch (0) handicap player. 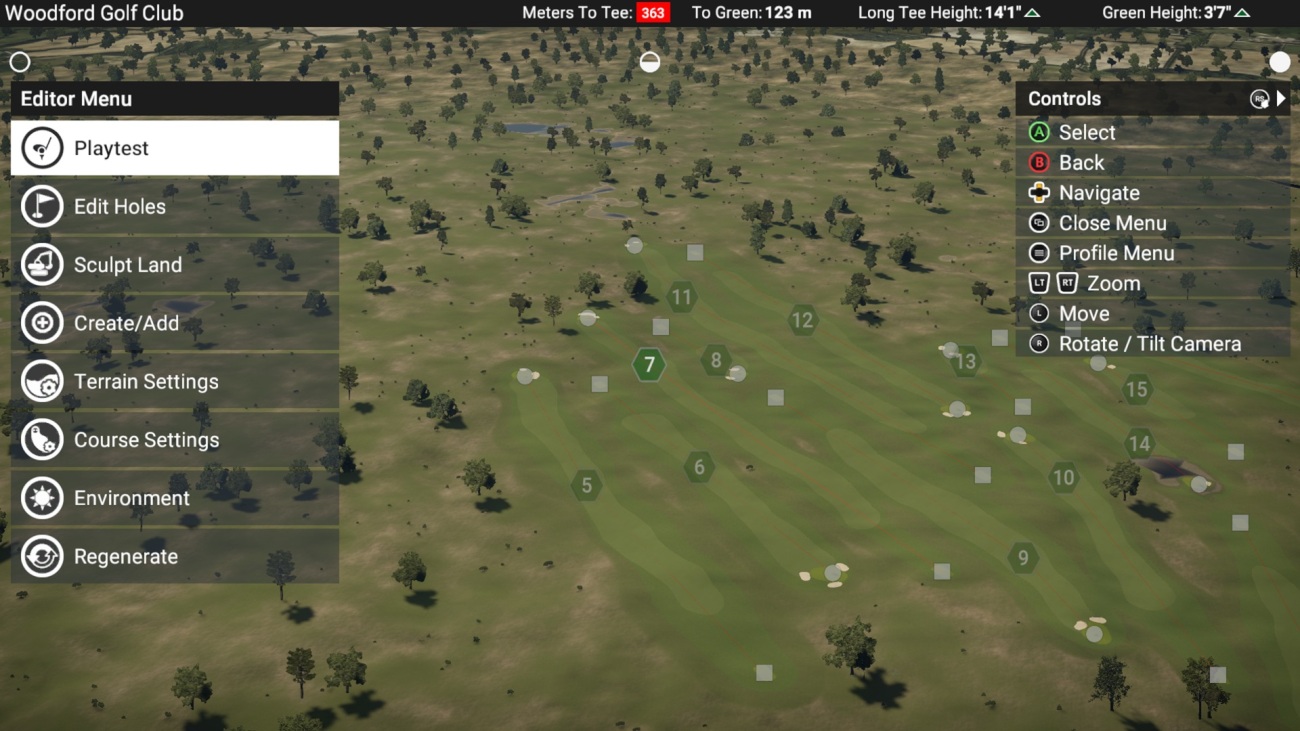 The course designer is excellent and gives you amazing development tools for your new design.

I can’t understate how good this system is and really wish other golf games did this. It truly levels the playing field and makes for some extremely exciting golf matches. Of course some tournaments won’t allow you to include the handicap system, but that gives you even more incentive to get down to scratch or better. The physics of the game, and the control, is just excellent. You really start to get a feel for the ball striking and putting. You need to sink a long putt, you’ll need a longer backstroke. This game focuses on tempo and it makes for some very rewarding play.

The course designer is back and more functional than ever. I haven’t fully sculptured a full course but the variety of design options is amazing. The other great feature is that for all of those budding designers that had already invested a lot of time in the original game, all the courses can be imported into the new game. This means there are tonnes of courses to play from day one, which is absolutely fantastic.

There are a great many filtering options to find a new course to play.

The developers have provided many more options for creating your player’s face, after picking gender. You can also buy via in-game currency a lot of clothes and accessories to customise your golfer. I would have liked to have seen the ability to change your body shape but perhaps we can get that at a later time. In terms of equipment there are only really three sets of golf clubs, but do they make a difference. The “standard” set is good for beginners and provides plenty of forgiveness, but you can’t quite shape the shot or him them as long. The other end of the scale is the “tour” set, which means if you are even slightly off in tempo or swing path, it will mean a very poor shot. I’m still working with the “player” set, which is a compromise of the two. You can change the type of clubs you want to use as well, whether it be more hybrids in your bag for example.

So, how are the graphics this time around? I’m happy to report even on the Xbox One they are much improved. I think with the beefed up consoles and a powerful PC it would look a real treat. I’m looking forward to playing this on the Xbox One X later in the year and will write up on this when November comes around. The game is quite pretty now, and the lighting effects are really nice. The camera views and presentation is great too and with the new game there is a proper tournament style gallery, with crowds etc now. There is additional commentary during the tournaments as well, which is more than welcome.

Creating your own club for players to join is easy, and you can then setup events as well. This one is at a player created St Andrew’s Golf Club.

A new feature to The Golf Club 2 is the Society system. This allows players to create a proper club house and invite other players to join. You’ll be able to upgrade the clubhouse look and host club matches and tournaments. This is a great feature and there is already plenty of different clubs available. Depending on how you upgrade the club helps determine the length of the season (starting season is 10 tournaments). When adding tournaments you can specify how long they run for and whether it is a major tournament or not. Indeed, this is how the developers have added something players wanted in the first game, a single player campaign. I have played quite a bit in the single player campaign, and while it is fun, you’ll find yourself drawn more to joining real societies and going up against your friends and other real players.

The multiplayer works quite well, but it is a bit fiddly to set up synchronous play. I’m sure this will be improved over the coming months, and to be honest I may be missing something.  It seems you have to enable turn base play from each player to do a turn based traditional game of golf and I haven’t had any success in setting the players up in a pre-lobby. One player has to start the game, which in turn sends out a notification to other friends and then they can join on you. 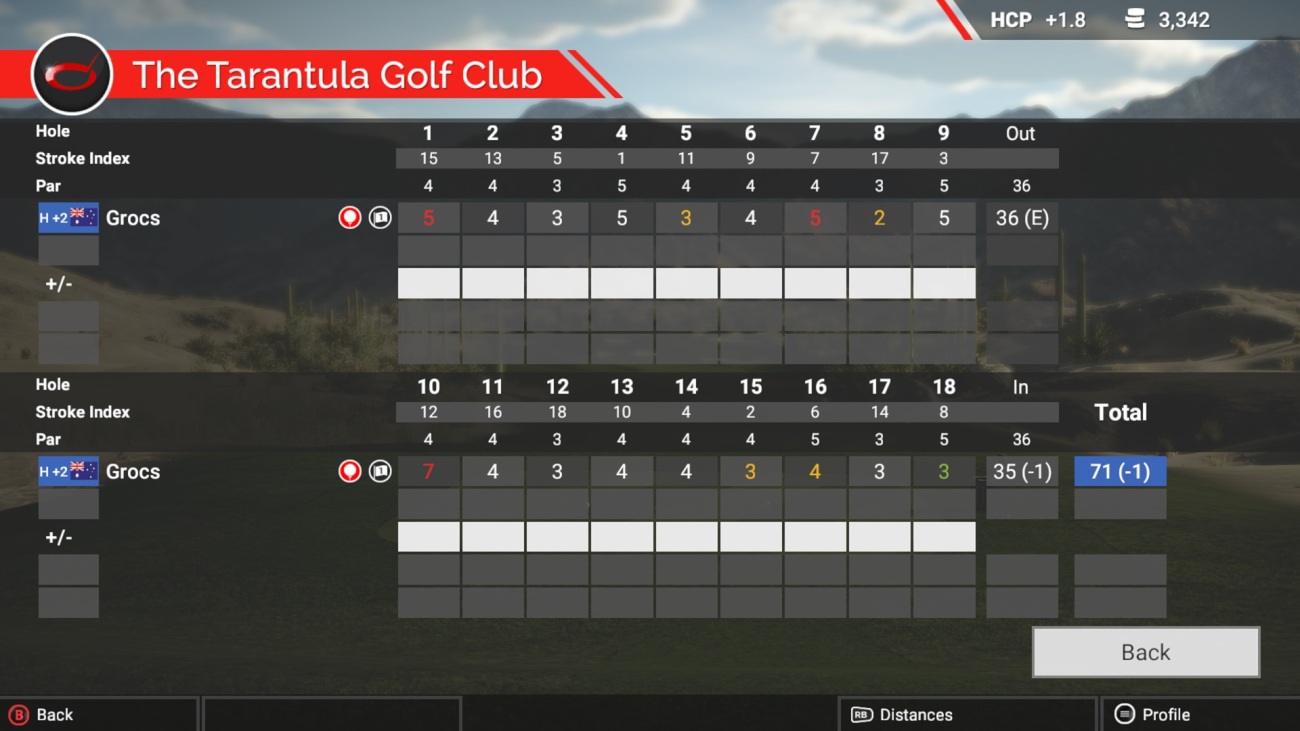 Just like real golf, you’ll have some great holes and some not so good ones on your scorecard.

It does work really well once the game starts, but a bit clunky to get setup. On the plus side it is a drop in / drop out multiplayer, so you can have your friends start in the round with synchronous play and they can be playing on hole 1, while you are on hole 5. The other great feature is you can add your friend’s ghosts as well, if no one is around to play live. Out of the box multiplayer supports stable-ford, four- ball, match play and of course, stroke play.

I can’t honestly not reiterate just how good The Golf Club 2 is. If you are after a proper simulation of golf then look no further. This game delivers a quality simulation experience in spades, and for that I am so impressed. If you are perhaps a gamer who likes the cartoon like arcade type golf game then this game probably isn’t for you.

I can truly see longevity in this title because of the huge amount of courses that are present. Every course is different, and plays with huge variety. I’m really looking forward to seeing how this game will run on a more beefed up version of the Xbox One as well. It looks good now, but for PC, PS4 Pro and Xbox One X gamers I’m sure it will look even better.

It is great to see an indie developer knock it out of the park and HB Studios and Maximum Games have done just that. If you’ve always liked golf games and have been disappointed with EA’s latest, then give The Golf Club 2 a go.