It’s taken a few weeks of waiting but my brand new power supply for my recently restored Commodore 64 has finally arrived from Poland! At the time of the C64’s repair it was recommended that I never again try to use the old power supply as it could be classed as a weapon of mass destruction. Seeing as I spent a few dollars bringing the computer back from the dead it seemed like sound advice.

The mighty new power supply! The round connector at the front allows a 1541-II disk drive to also be powered.

So I played a waiting game for a newly built replacement power supply to arrive via post. Just in case I paid a few extra dollars and went for an enhanced model on offer that included an additional connector for powering a 1541-II floppy disk drive. It’s a bit of overkill but does add value to the system as a whole. The new power supply also has its own power switch that means the computer’s own can be given some respite from constant use. All in all it’s a well built bit of hardware that looks like it’ll keep the C64 running for a long time.

Now that I finally have everything I need I hooked up the C64 and successfully powered it on. Seeing that basic prompt come up brought a big smile to my face as it had taken a while to get to this point and I was quite relieved that it all come together as well as it did. I couldn’t help myself and had to do the obligatory two line BASIC program to print text down the screen. 🙂

Next step was to see a game running so I dug out the International Soccer cartridge I picked up recently, plugged it in and gave it a shot. Thankfully it was all exactly how I remembered and helped confirm that the old machine is back up and running! We’re definitely not talking about a game at the level of FIFA here but it has large colorful sprites and is a good way to confirm that everything works. 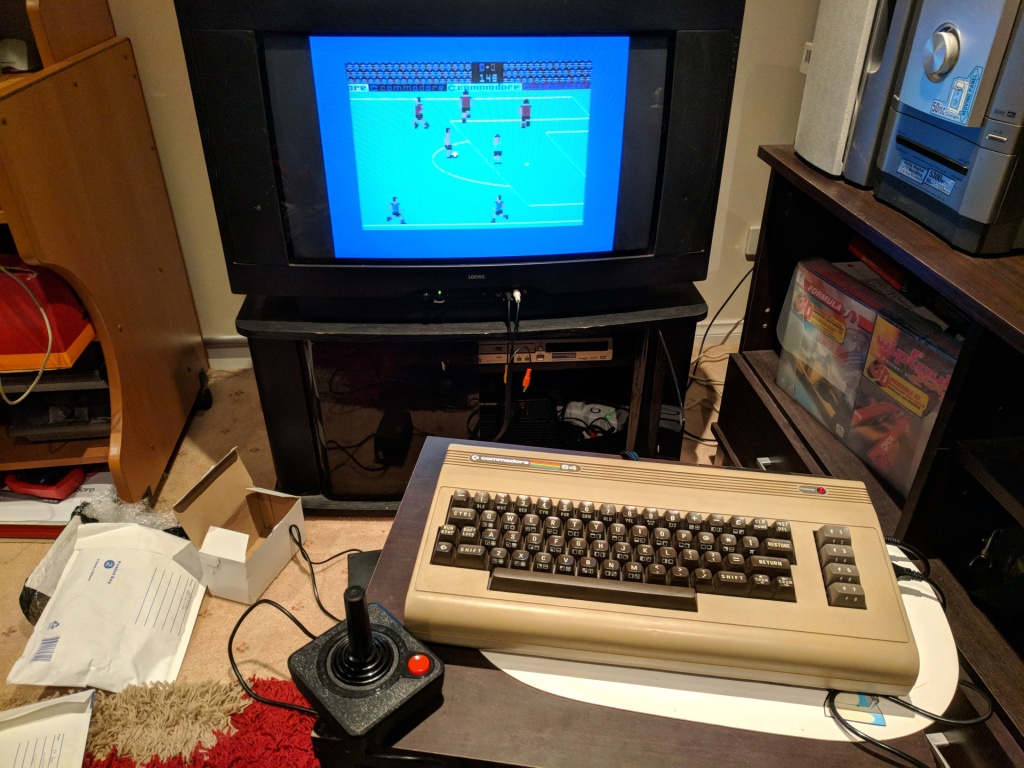 My plan it to have C64 easy to access in my gaming room so I’ve now got to get it organised so that the machine has its own dedicated space. I’m looking at using an old computer desk as a nook to hold a couple of machines and will see if I can be creative and have this happily sitting with my Atari machines. I suppose back in the old days that might be considered sacrilegious to do so… like having a Genesis/Megadrive with a SNES or PlayStation with Xbox… but times have changed and not everyone has a warehouse for their retro gear.

The next step after this is to get more games onto the system. Thankfully there’s some pretty great tech out there now and much like the path I had taken with my Atari 8bit machines an SD card based drive is the way to go. Known collectively as SD2IEC devices they are looking like the best bet seeing as they can also work with “fast load” cartridges to improve load times. There’s also a neat alternative called the uCassette that lets you hook up an MP3 player and have it act as a datasette (tape) player. I’ve yet to order anything yet but when the time comes and I’ve settled in there’ll be yet another update with a lot more games in action! 🙂