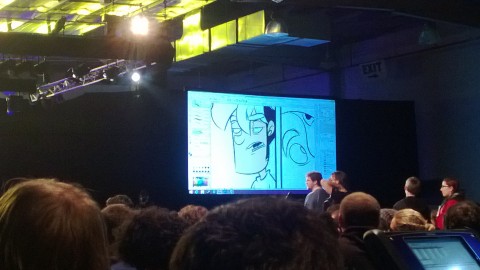 Part team sourced cartoon and part Q&A. That was the best way to describe the second Penny Arcade panel I attended.

In the beginning, Jerry wrote up the dialog for the three cartoon panels and whilst Mike handled the drawing side he managed a Q&A that felt far more spontaneous and relaxed than the previous day. I think once attendees knew what to expect, they were more willing to throw curveballs at the hosts. Sharing knowledge of drop bears was considered of paramount importance. 🙂

Seeing both attempt to eat a Vegemite sandwich halfway through elicited a lot of laughs and cheers. And their willingness to extend the session an additional half hour won them more fans.

I enjoyed this one even more than the first one yesterday and can’t wait to see what’s in store for the finale.