Tales from the Borderlands (Episode 3) – Consequence rears its ugly head

In “Catch a Ride”, the latest episode in Tales from the Borderlands, we very quickly get exposed to the brutal consequences of choice on the planet Pandora. That it takes such a dark turn from a split decision made only a moment earlier makes for a memorable opening that shows this episode is quickly forging its own path.

The episode begins with you seeing the results of your very last choice from the previous episode; if you can remember… it’s been three months since the last one. After obtaining the Gortys Project with hopes it will lead them to a Vault, Rhys and Fiona quickly learn there is more to their new prize than they had thought.

Anyway, this time the game thrusts you straight into a couple of action sequences before the more traditional adventuring elements kick in. In the context of the series, it fits in with the continuing narrative but could catch players out initially with its mechanics. However it is thankfully short.

The gang’s all here.

The narrative in this episode focuses a lot more on developing deeper relationships between the characters and it pays off in spades.

Seeing Rhys work at being a little more than an ex-Hyperion stooge is a surprising highlight and goes a long way to make him appear more human, especially his dealings with Sasha. Fiona’s own arc is also being built up, as is her new destiny as a Vault Hunter, and looks like it will come to a head later down the track as she deals with her new association with Athena.

The darker turn the series appears to be taking at this point really helps to solidify the storytelling and provides a different feeling to the cliffhanger ending that I hope means we’re going to have one hell of a rollercoaster ride to the series end. 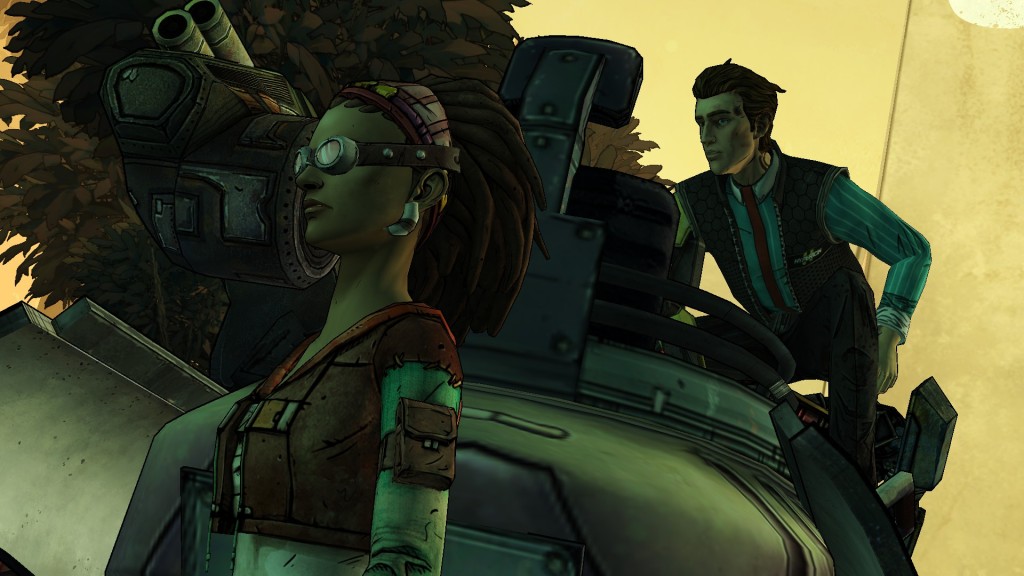 Surprising friendships and bonds are made during the course of the episode.

What continues to be a strong selling point of the series is how greatly Borderlands fits in with Telltale’s way of making games; it’s one of the most perfect collaborations you’re ever going to see in gaming.

Much like The Walking Dead, the technology works well with the visuals and its cel shaded style. The episode structure is a nice touch too with its adoption of a television like format with teaser sequence prior to the main credits and meat of the game. I actually look forward to finding out what music will be used as the theme for each episode.

If there’s any gripe I have with the episode is that I wish it had not taken so long to arrive. After what seemed like a small stumble with the second episode, this one would have completely obliterated its memory quickly if it had arrived sooner. It’s a cracking reminder that the series has such long term potential and it’s only just started.

Hyperion’s shadow over Pandora continues even without Handsome Jack.

With us now halfway through the season, it’s now clear that the game is beginning to succeed in bringing a more personal identity to Borderlands while continuing the franchise’s talent for dark humour in its science fiction setting.

Handsome Jack would be proud… if he wasn’t already dead.

Please note: The version reviewed was for the PC, downloaded via Steam. The game is also available on other platforms including both console and mobile.