I think it is safe to say I have put quite a few hours into The Crew. I have always thought the map size was one of the best things about the game and there was plenty of variety in driving around. The Crew Wild Run has enhanced a lot of the original game’s flaws, while drastically making one aspect a lot worse.

Firstly, the great news is that the game has been given a complete graphic overhaul. This is not a gimmick either – it actually does look so much better than the dull and drab graphics of the original. This is free too – you don’t have to buy The Crew Wild Run to take advantage of the graphical overhaul. There is now dynamic weather as far as rain too and it works really well with the already present day / night cycle. Handling has been tweaked across the board – the cars feel more responsive now plus the engine noises have been improved. The game is finally starting to look like a next gen game. The only slight downside to this is that zipping around the different hot spots on your map takes a little longer to load and there is some weird lighting glitch inside some of the tuners and car dealers.

The anticipation has been building for me since The Crew Wild Run announcement at E3 mid year.  The number one thing on my wishlist for the game was to have bikes and sure enough Wild Run has seven of the beauties for you to ride. Well known manufacturers like Kawasaki, Ducati and BMW are part of the mix. The bikes themselves handle really well and it just feels amazing to be able to nimbly zip through traffic at 350 km/h. Unfortunately one of my biggest criticisms of The Crew Wild Run surfaces quite early as you go to buy your first bike: micro transactions.

Every car and bike is well modeled on their real life counterparts.

Let me state that in theory I am not against a micro transaction model, particularly when it is used appropriately. I feel here that Ivory Tower and Ubisoft have gone way too far with this in The Crew Wild Run. Even the original game suffered this to an extent and here’s the reason why: the in game cost for cars, bikes, helmets and other apparel is not accurately reflected by their real world counterparts. I don’t recall the last time a motorcycle helmet cost $50,000. Nor do I recall the top of the line BMW motorcycle costing $500,000. You think you’ve saved enough cash in the game to be able to buy all seven bikes at launch? Think again. What makes matters worse is that buying Crew Credits (with real money) isn’t cheap either and even with their semi frequent real money sales is still way overpriced. This to me is the number one failing of The Crew Wild Run. I get that they want to try and make more money so they can release annual updates (which I am all for) but if you are going to have to buy Crew Credits please make the in game purchases roughly equivalent to their real world value.

Drifters will enjoy this new addition.

The problem is that this micro-transaction model feels apparent quite too often, which is a shame, as the The Crew Wild Run is much improved over the vanilla version released late last year. I love the idea of qualifying in new event types in “The Summit”, a fictional race event that you have to spend a fair bit of time doing drag, drift and monster truck themed events. The monster truck events are great fun and remind me of classic games such as Stunt Car Racer. A huge jump and extreme stunt park is setup for you and the goal is to score as many points before the time runs out. Drag Racing is quite fun too because you have to time your gear changes (no automatic option here) to try and accelerate to the best speed possible. Drift racing I can do without because I just don’t like drifting, but that is just a personal preference.

Looks even better at night now with the graphically overhaul.

Once again though if you want to upgrade one of your existing cars to these new extreme type classes, prepare to speed $500,000 per class (update – I did actually win a Monster Truck mod by playing heaps of Summit qualifiers so it is possible to win the mods).  Once again the damn micro-transaction model gets in the way. I bought a new drag race setup so that I could slowly build up the car further in the new summit events only to find I couldn’t buy a Monster Truck because I had run out of cash. Some great features to make the list in the expansion though are free stunt mode and free challenge mode. Just like Test Drive Unlimited you can now setup custom checkpoints and races for your crew and challenge other players to racing you in them. This is great. The free stunt mode is awesome too – just hold right D-pad on your controller and it will give you a list of progressively hard stunts to do. This will help you get a qualifying ticket for your first qualifying event in The Summit. I must admit making the final Summit event is quite difficult on your own. So far I have only managed 1025 place (Silver Medal) with the Gold medal roughly at the 800 place mark. It is a lot of fun trying to improve your score and time across the twelve qualifying summit events. It would be easier in a Crew though as there are two events specific to four players. I did try and find a random crew but had no luck. 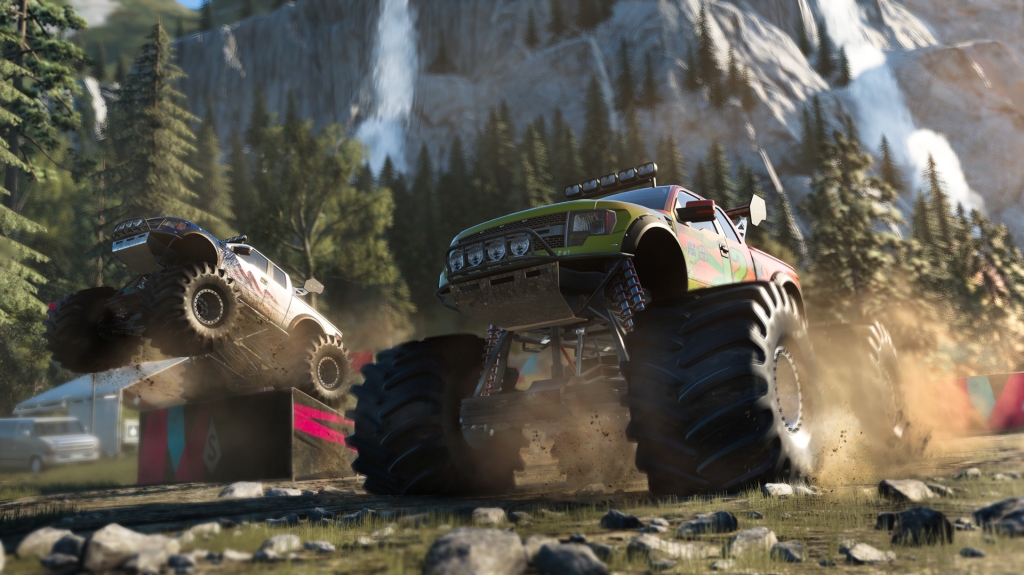 If you like original game I do think you’ll really enjoy The Crew Wild Run. If you are new to the series I would consider it as well because you can buy both the vanilla game and the add on for less than the cost of the original game last year. This game is also designed to cruise around with your friends as well so perhaps hold off unless you’ve got mates that are keen to play with you as well.

The Crew Wild Run is a great addition to the original game, undermined by an over the top micro-transaction model.