After years of hype, and dare I say it hysteria leading up to its launch, Hello Games’ epic No Man’s Sky is here and people are diving in a getting to grips with what the game is about. Not surprisingly it isn’t quite what everyone was expecting in both good and bad ways.

Good news is the game really does deliver worlds to explore and creatures to encounter. What impresses me more though is how good a job it does of making you feel that this is an occupied universe. Ships will be streaking overhead or jumping in and out of hyperspace and generally filling the skies around you. The NPC aliens do their job in that fashion too but seeing as I’ve never seen more than one in a single room ever so it makes them come across as quest givers and nothing more. The language system, involving collecting knowledge of a species through monuments you find, is a fascinating touch. 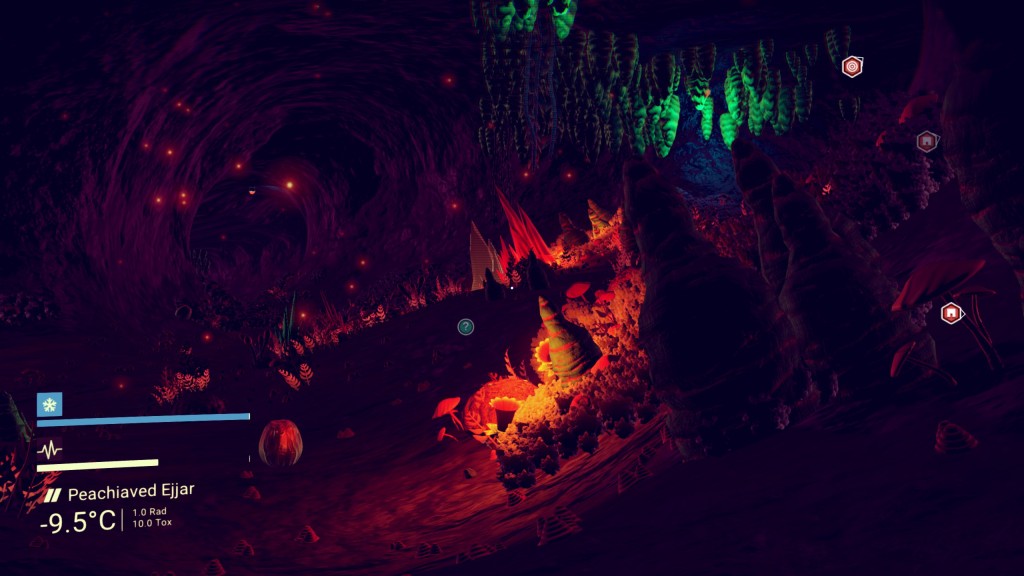 Searching for materials in caves tends to give you some surprisingly colourful scenes… easy to get lost in too.

Searching for materials to enhance, repair and refuel your exosuit, ship and multitool appear to be key to progressing further in the game and those crafting aspects are where people make the Minecraft comparisons. It’s certainly not in the same league as Mojang’s game but there’s enough of it to require a bit of grinding to get the resources you need for that next upgrade through mining or trading. There’s a lot of worlds to explore but you’ll be spending more time scraping by to begin with than travelling.

Thankfully, once you begin to earn credits the trading system becomes quite useful in getting what you need if you are in a bind and there doesn’t seem to be any shortage of locations to get what you need. On hostile worlds where resource gathering can be difficult, being able to buy your way out of a situation will be a handy alternative to trying to shoot your way out.

For a game that’s about travelling the galaxy, you are likely to find yourself spending more time early on with your boots on the ground exploring that way. I did begin to use my ship more for travelling around planets to reach points of interest but even then you still encounter the issue of refuelling your ship on a regular basis which may push some players to cut their losses early and leave a planet long before they have seen everything.

Travel between worlds and locations is mostly guided (if you want to get there fast) but it looks VERY pretty.

Visually the game does an amazing job of realizing these worlds and the fauna and flora that inhabit them. I’m sure I’ve barely scratched the surface of a surface, etc in terms of what is possible but that the game is able to render these worlds so successfully is a credit to the developers. You aren’t short of opportunities to view beautiful vistas in this universe. The colour palette and hardware designs really give me the vibe of 70’s sci-fi art in a way that I haven’t seen since Mass Effect.

Things aren’t always perfect though. After mining out the bottom of a gold mountain only to have the top float above the ground, that sense of immersion was briefly lost to me and that Minecraft comparison came rushing back. Implementing physics on this level is asking WAY too much but the first time it happens it will throw you out. The framerate can be inconsistent at times too – worst part is that you can’t always predict when it is going to happen as it doesn’t seem tied to the complexity of what’s on the screen. The system used to change the level of detail is an odd beast – with it’s use of a pixelated fade in it seems more appropriate for a game from 20 years ago than a modern title. On a high resolution screen it can stick out like a sore thumb. Despite that I’ve run it at 4K on PC and the game does look pretty fine but right now I’m keeping it at 2560×1440 which on my 970 seems to be a good compromise.

The audio is flat out amazing – the music is generated like the graphics and the sheer variety (and quality) of it so far has me stunned. Every time I’ve started the game I’ve had something different playing to me and I can’t begin to express how well it works. The game will probably win awards on the graphics side but it would be a tragedy if it were not to receive kudos for the music. I’ve had 70’s style new age, a percussion heavy track and even what I swear was a choral arrangement too… and they all fit the game. 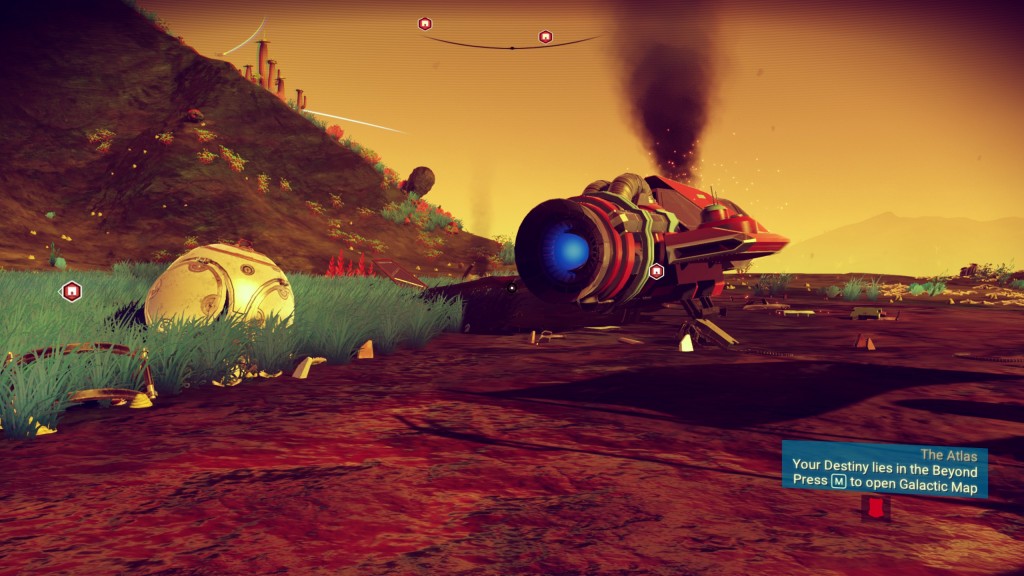 Occasionally you’ll find wreckage left by pilots less… lucky than you. Don’t let it stop you pilfering their gear though.

For someone who has spent a fair amount of time in Elite: Dangerous it’s fascinating to see a game that on the surface might seem similar (galaxy to explore) but is trying its best to be something different, even if the end result still leads to the same grinding that may end up making the game appeal to the same type of player. Once we get some more time in with it, we’ll dive into a meatier review. Now, if I can just figure out what that Gek is saying to me…

No Man’s Sky is out now for PlayStation 4 and PC. Game played on PC.