After poring through a box or two of Atari ST games during the last few months, another box arrived recently but this time instead of games it was one of the prominent gaming magazines for the platform. 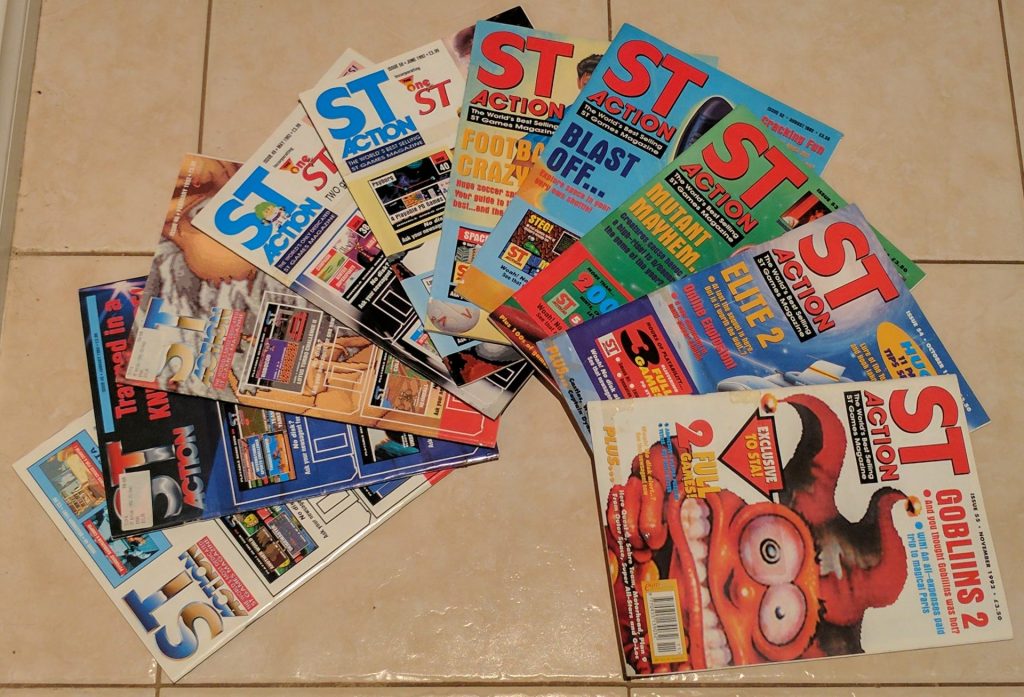 Just a few issues from my box of nostalgia.

ST Action was a UK gaming magazine that first launched in April 1988 and was known for being one of the first magazines to use digital capture methods for screenshots. Compared to other publications still using cameras in front of televisons, reviews in ST Action had brilliant images that prior to YouTube, were probably the closest thing to having the game in your own hands.

Art from the games was often used on the covers to showoff games in all their pixelated glory. In this case it was Chuck Rock.

Over time some of the reviews would leverage a game’s imagery further becoming impressive advertisements for the very things they covered. I’m certainly not afraid to admit many of my gaming choices were based on what I saw in these magazines as I was growing up.

I was a big fan of the demo discs too. Having regular access to previews of new games went a long way to allowing readers to be selective on their gaming purchases and much like earlier pioneers such as Zzap!64 (which used cassettes for the Commodore 64), the contents bundled on the discs could give you a couple of hours of entertainment which was an added bonus.

In an age before the Internet and resources such as GameSpot or IGN, magazines were the place to go for this information and the UK produced an impressive amount of publications for the systems that were popular through the 80’s and 90’s. If you liked the review style you tended to stick with those magazines.

For a while ST Action also benefited from a regular column by Llamasoft maestro and future king of the tube shooter Jeff Minter. At the time he had strong ties with Atari and was exceedingly prolific and would often talk about the games he was working on but he also wasn’t afraid to talk about his fondness for the console platforms either. If you were curious about what else was out there his column was a good place to start.

ST Action’s review of The Secret of Monkey Island was not afraid to use the excellent environment art from the game.

This was where I had my first real exposure to the game Elite, though previews and later reviews of its sequel Frontier: Elite II. 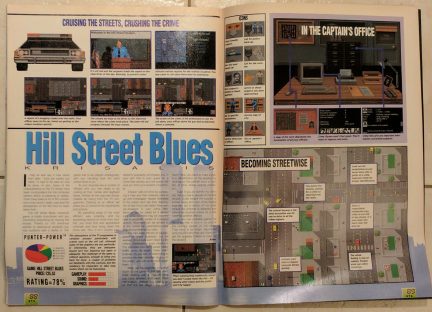 Licensed were exceedingly popular during the period as a means to help sell a game. In this case it was police drama Hill Street Blues.

ST Action lasted as a separate entity until November 1993 when it was folded into Atari ST User which only lasted another year. At the time the ST was beginning to wane in popularity as the PC began its ascension so many publications at the time were disappearing.

So even though it was around for only a short time, I’m going to remember it as being the first ST magazine that really showed me just how much cool stuff there was to play at the time.

For anyone curious about revisiting issues, a handful of them (including some pictures) can be viewed here at Atari Mania.

Leave a Reply to The Night Owl Cancel reply