Titanfall was the first salvo fired from the developers of Respawn Entertainment and showed that the creators of Call of Duty were able to deliver a new type of shooter to the genre. Though criticised for its lack of campaign the game excelled in its multiplayer action between pilots and their Titan mechs. The sequel does a lot to remedy that and excels in ways that are both surprising and rewarding. The big addition to Titanfall 2 is of course the single player campaign. Unlike the first game which used a few multiplayer maps joined together through a light narrative this time we get a fully fleshed out story with all the action set pieces you could ever ask for.

Meet BT – your titanium pal who’s fun to be with.

The story casts you as Cooper, a Rifleman for the Militia (the “Rebels” to the IMC’s “Empire”) who during a mission inherits a dead pilot’s Titan and is tasked with carrying on a vital mission. The story fits the game’s need to provide both an experience for solo players as well as a tutorial for multiplayer. There’s plenty of situations presented to you that will not only test your movement skills but get you acquainted with the various tools of the trade.

Rounding out the story is your interactions with the Titan BT-7274 who it turns out has a lot of personality for a giant bipedal death machine. “BT” is very much the main driver for the story and though it may seem easy enough to have you plowing through obstacles in the Titan there are enough obstacles thrown your way that force you to spend a great deal of time using your own feet. Through BT you’ll also become familiar with the different Titan types available and their specializations.

Tip: for those looking for easy achievements/trophies it’s worth testing out each type and getting some kills in with their unique abilities.

Multiplayer at launch was solid but I had some trouble getting used to the changes at the start. It wasn’t so much the new game’s modes it was that the Titans seemed a lot harder to earn initially and once you got one it just felt a lot more vulnerable than before. When you have a game about giant robots you really want to give players exactly that and not ruin the enjoyment. The beta for the game exposed that flaw quickly but Respawn did well to rebalance the equation and slowly bring the game back to something closer to the original game.

There were smaller changes made too that felt like they took away from what was already a solid experience in the first game. Riding a Titan and shooting out its head was replaced with a mechanic involving stealing batteries to charge up your team mates which sounded great in theory but I didn’t see a lot of it happening in practise. Zip lines were mostly cut in favour of pilots equipping themselves with a grapple and around Spider-man style. The strangest for me was cutting back the player’s loadout to only a primary and anti-Titan weapon… no sidearms. Trying so hard to differentiate itself from the first game was discouraging for me at first as I had REALLY liked how Titanfall already played. 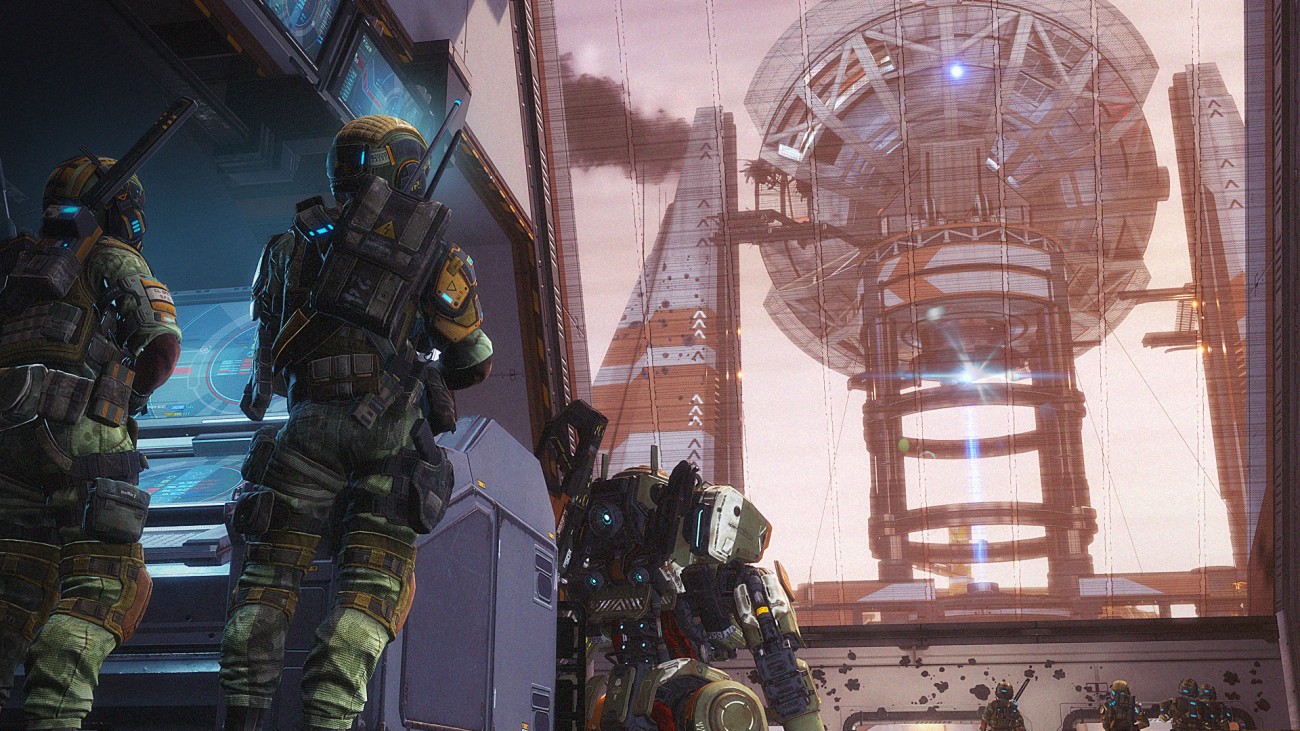 The world design perfectly sets up the many scenarios you face solo or with your Titan.

Visually the game looks great. The design takes from what was set up in the original game but it is ratcheted up a few notches thanks to what the campaign brings to the table with its vast and inspired levels. As far as I’m concerned, some of them border on genius in their execution. One of my early favourites is a factory/assembly line with its vast spaces that literally flip before your eyes. Another uses cranes to move parts of the level around so you can use your wall dash abilities to reach previously inaccessible areas. The multiplayer maps continue this trend with some great use of height and angles in areas that at times make you feel like you’ve jumped into an entirely different game. This is no corridor shooter you’re  playing here. All of it runs at a steady clip too so you’re not sacrificing scope for performance.

Respawn’s post release support has been absolutely stellar for the game. Though I wasn’t happy with the changes to multiplayer from the beta and at launch, they’ve slowly been evolving the game through updates and with the addition of Frontier Defence I’m really liking how it now is. Player versus AI modes aren’t new admittedly but Frontier Defence helps let players experience the best of multiplayer action without the stress of facing off against real foes. It was surprising how it didn’t make the cut when the game first launched but it’s great to see it finally make a return.

There’s a lot to like about Titanfall 2. The campaign is loads of fun and worth the price of entry on its own and the multiplayer has evolved over the last year to be WAY better than it was when it first debuted. I’m only an occasional competitive player so having a cooperative mode included makes a world of difference to me and it turns out that Frontier Defence is pretty great too and perfect for a few rounds online with friends.

Even if you’re tried of there being so many sci-fi shooters on the market right now you might still be surprised with what Titanfall 2 offers. It’s now a far more complete package than its predecessor with plenty of content in it to satisfy most players.

Titanfall 2 is out now for PC, Xbox One and PlayStation 4. Reviewed on Xbox One.