Guardians of the Galaxy Vol. 2 (Review)

After the surprise success of the first film, it seemed only natural for Marvel to want to get back into space again for a sequel. And in a very wise move, they kept the majority of the creative talent, including writer/director James Gunn, and let them run riot in a film that had a lot to live up to. That is handles itself so well has to be a good sign of this being a franchise for the long term.

The film doesn’t wait too long to throw the old team into action with an impressive opening sequence that shares that original’s upbeat tone thanks to the clever use again of a retro soundtrack to back each step of the way. I’m so hoping that this upbeat attitude continues in the future because it just oozes fun and encourages you to sit back in your chair in anticipation of a good time which Guardians Vol. 2 is happy to deliver.

For Peter Quill aka Star Lord (Chris Pratt) his past finally catches up to him when he is tracked down by his father the godlike Ego played by the also godlike Kurt Russell. On top of that, a falling out with Rocket (Bradley Cooper) has left the team split in two with both now targets of the gold skinned Sovereign, led by their high priestess (Elizabeth Debiki). Without the need now to establish the main characters, they’re free to be themselves from the outset. Drax (Dave Bautista) continues to deliver great lines at the most unexpected of times and seems to now be content being part of his new family. Time now has made Gamora (Zoe Saldana) an even stronger voice of reason who finds herself dealing once again with her overly angry sister Nebula (Karen Gillen).

One thing that always stands out of me about the Guardians films is that they like to remind you is that with all the smart people existing in the universe there is an equal number of stupid ones too. Often the truth of where people sit on that fence usually is revealed in the funniest ways too. You’re never going to see a moron as part of a Star Trek ship’s crew but you’re certain to find a few around here. In space, no one can hear you scream but you can still see them laughing at you.

In this film, many of the characters have made some pretty bad errors in judgement in their recent and past histories and the film does well to handle how well they all deal with the results of it. Yondu’s arc is probably the strongest of them all and aligns itself closely with the overall story but you can also see that Gamora’s has a lot of potential to be developed further in the future which I think is a good thing and might allow future films to focus less on Quill whose backstory gets covered here. 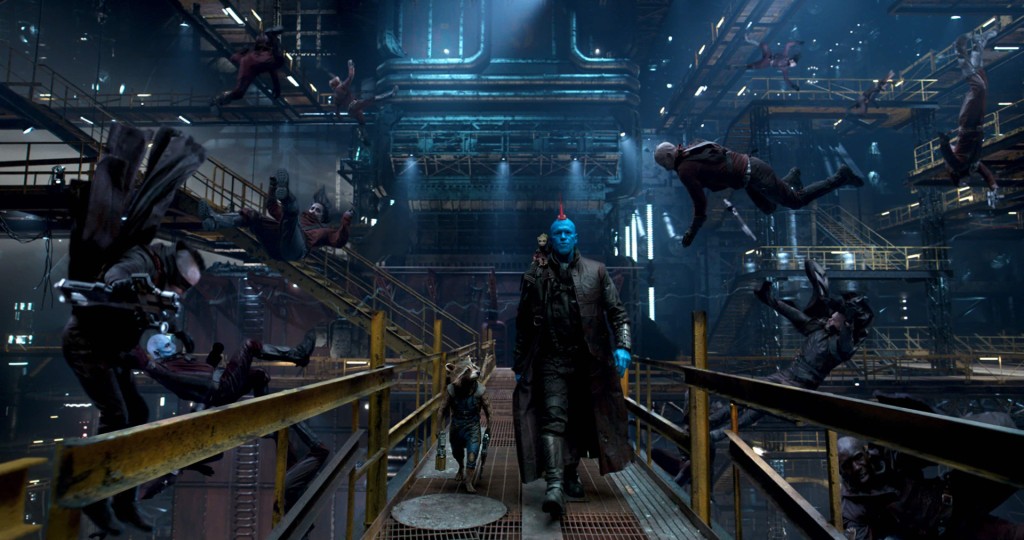 If this looks cool in a still picture, imagine how great it is in action.

Visually the movie is glorious. It’s a full on CGI festival but with a use of colour that makes this more a galactic Oz or Wonderland than similar films released at the time that lean more on blacks and greys in their stellar palette. If you want a movie that will show off how well your TV copes with colour this would be good place to start. I could imagine seeing this in HDR would be an even better spectacle. There’s a few neat moments throughout the film that are worth seeing including one lengthy sequence with Rocket, Yondu (Michael Rooker) and Baby Groot (Vin Diesel). Speaking of Baby Groot… that’s one hell of a good merchandise magnet there with the cute little guy often stealing the show.

Running at well over two hours there’s a lot of movie there for fans and Guardians of the Galaxy Vol. 2 delivers it. You’re not getting any social commentary, killer androids or bleak endings here, just an over the top popcorn movie that will keep you entertained from start to finish. One last thing: it’s worth keeping a close eye on everything you see in the movie – not only are there a lot of cameos (some great ones too), but plenty of post credits scenes and even a couple of sneak peeks at the future of the MCU. And then there’s the Hoff…

Guardians of the Galaxy Vol. 2 is out now on DVD, Blu-Ray and digital. Blu-Ray version reviewed.